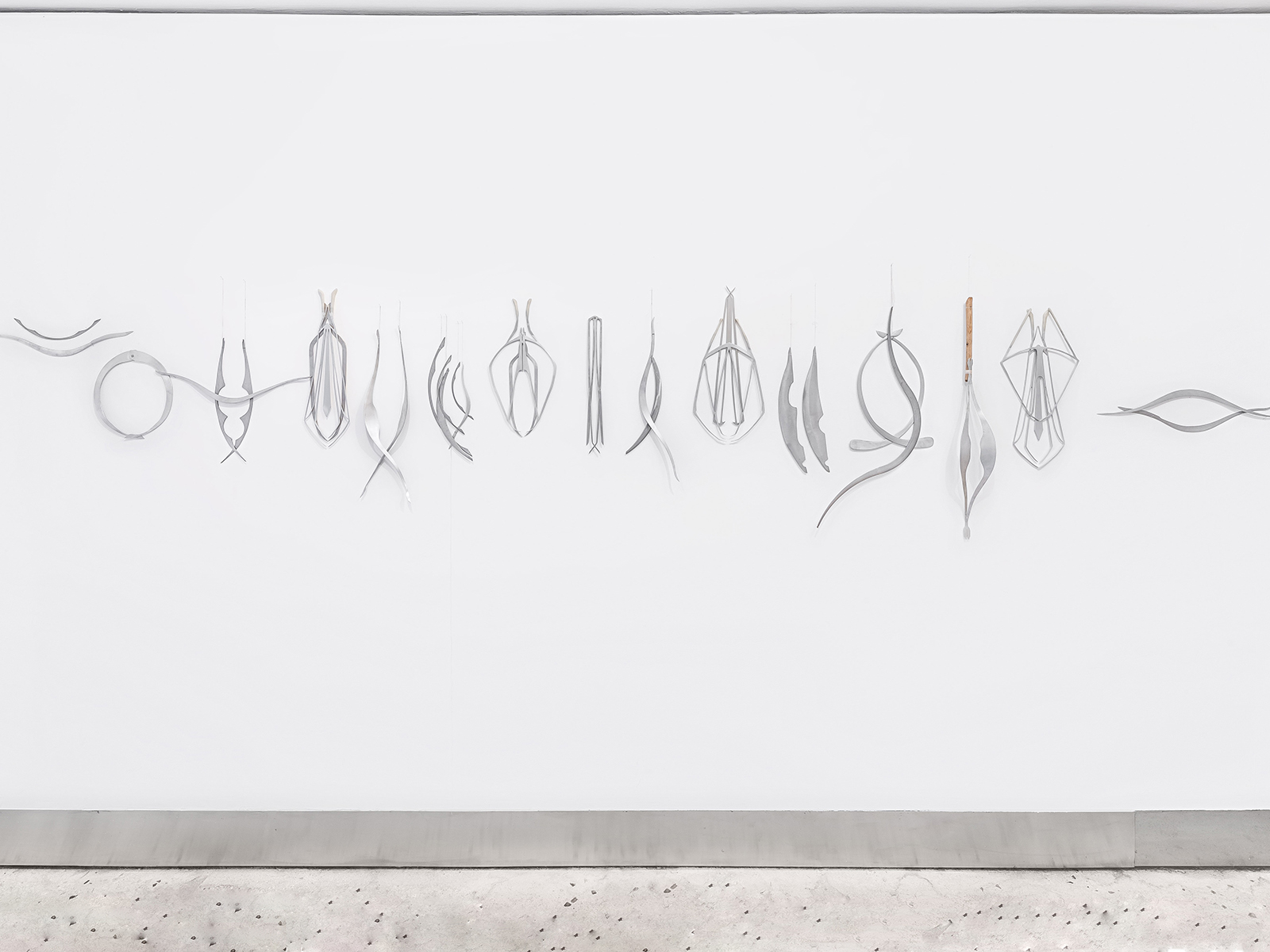 ALMA ZEVI is pleased to present Miriam Austin’s first solo exhibition in Italy, entitled Andraste, after the Celtic war goddess. Based in London, and born in New Zealand, Austin has a multidisciplinary practice. On the occasion of this show she has produced new works including silk collages and aluminium sculptures. These pieces explore the relationship between ritual, myth, ecological fragility, and the politics of the body.

Often drawing from female folkloric iconography, Miriam Austin’s work attempts to address the entanglement of privilege, oppression and representation that accompanies Western interest in ‘native’ or ‘folk’ religions and cultures. For her exhibition in Venice, Austin further developed her ongoing sculptural series Tools. These steel and aluminium sculptures have been carefully arranged by the artist as a site-specific installation for the gallery. The objects are self-referential, but have also been used for performances that are choreographed by the artist. With undertones of Austin’s interest in folklore, magical rites and rituals, the works are also intrinsically linked to a British landscape through the exhibition title, Andraste. This is an homage to the war goddess of the same name, who was invoked by Boudica in her fight against the Roman occupation in Britain in AD 60.

Austin’s Tools sculptures are curved, voluptuous, and razor sharp. Shiny but not reflective, they bring out the magpie in the viewer. Seductive, quiet and full of potential, they are fixed to the wall, or waiting to be used. Their forms are partly informed by early alphabetic systems, as well as other ancient systems of communication. And an almost calligraphic quality permeates the works, indeed one could say that the sculptures exist equally as delicate line drawings. These secretive objects expose our potential to question beauty, violence, and precision. They have a rhythmic musicality to them, shapes flowing and confronting one another; anachronistic works that reveal a contemporary manifestation of ancient references. How much has changed from prehistoric times until now, and are instincts the same since the beginning of time? The artist questions how, or if, to separate human nature and human culture.

In addition to Tools, Austin has created entirely new collages for her exhibition in Venice, printing on silk for the first time. With the collages’ titles rich in associations - Ritual for the Sterile Seed and Lotus - Austin introduces the viewer to another facet of her work. Here she uses computer programs, in a pseudo-rudimentary way, creating imagery that combines contemporary and ancient symbols. These include stylised metal goblets, shapes derived from the Tools, and mirrored arm gestures, all of which suggest an interplay of mysterious formulae. The layering of meaning in these pieces is inextricable from the physical layering of visual references. The backgrounds of the collages recall the texture of skin, but are in fact taken from aerial photographs of a series of coral atols and reefs. This confrontation between micro and macro, and the suggestion of the endless repetitions found in nature, is intrinsic in Austin’s work. And, as in her sculptural work, she creates a disconnected sensation, engaging ancient and modern, but with no suggested bridging point between the two. In all of Austin’s work shown in Venice, she offers the viewer a new perspective on the binaries of the natural and the unnatural, the sacred and the profane. This narrative aims to situate such oppositions within our contemporary life. Venice, with its complex socio-political and ecological current situation, seems an apt setting for the artist’s investigation into our relationships with history, industry, and artifice. 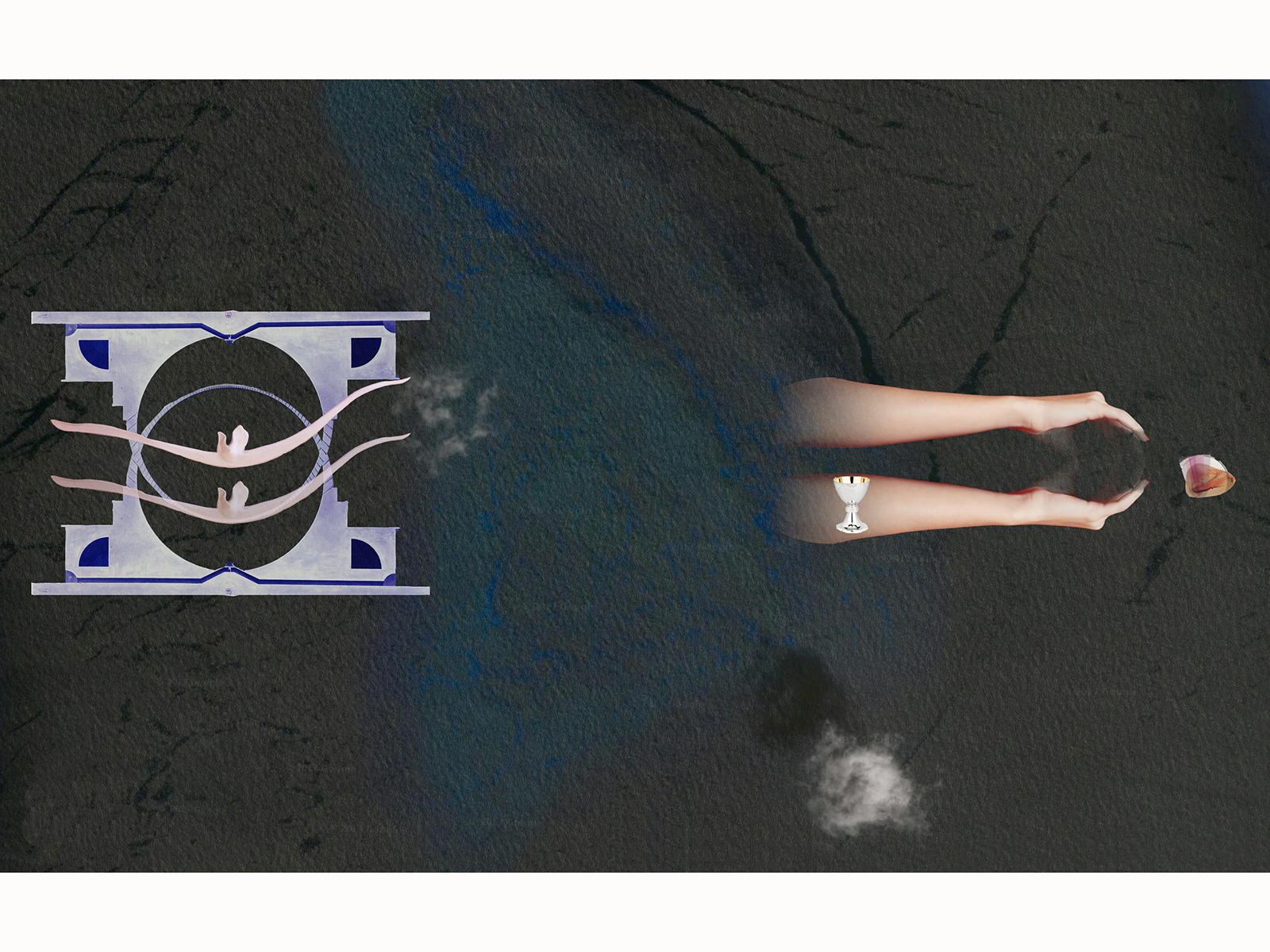 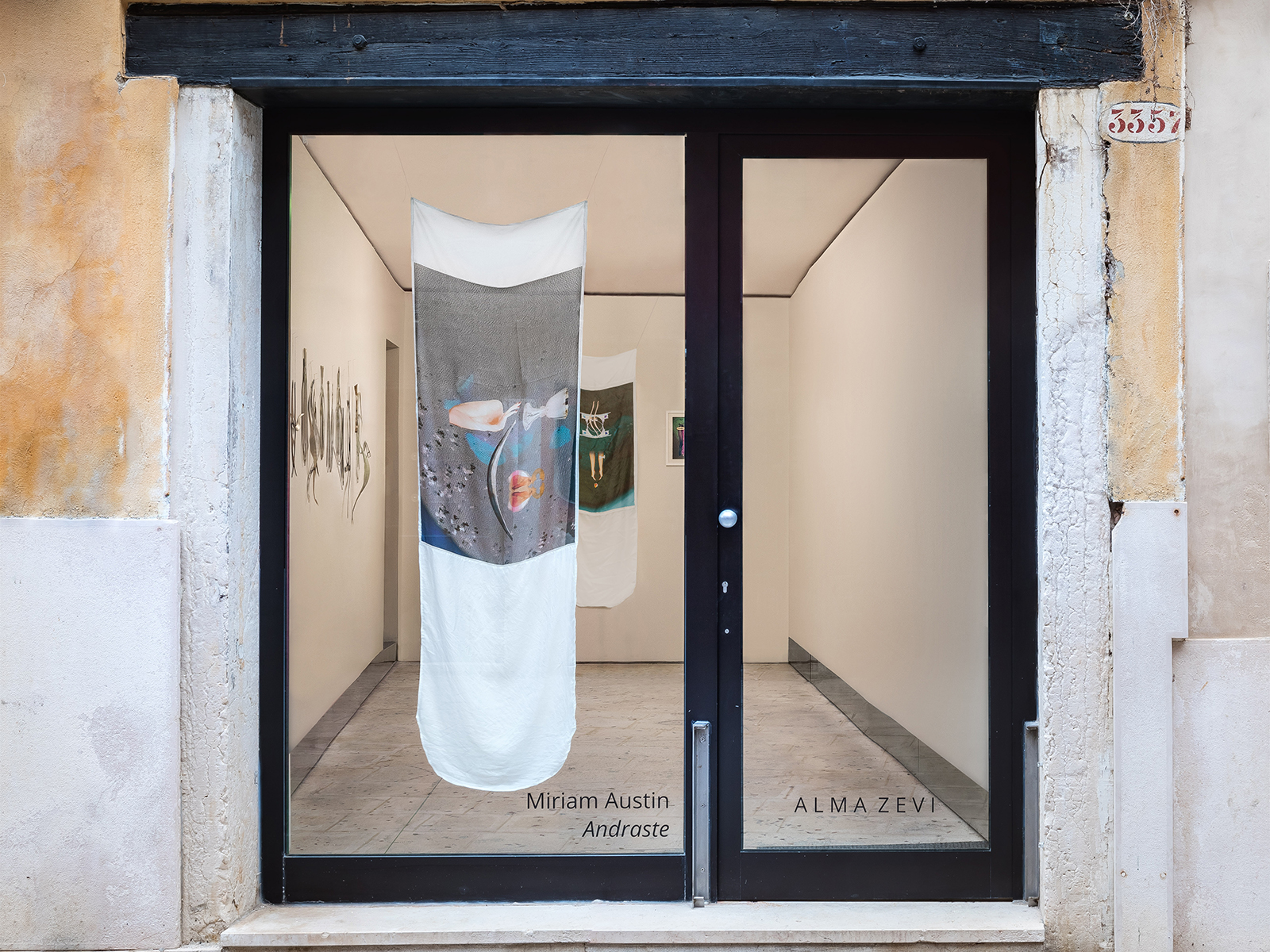 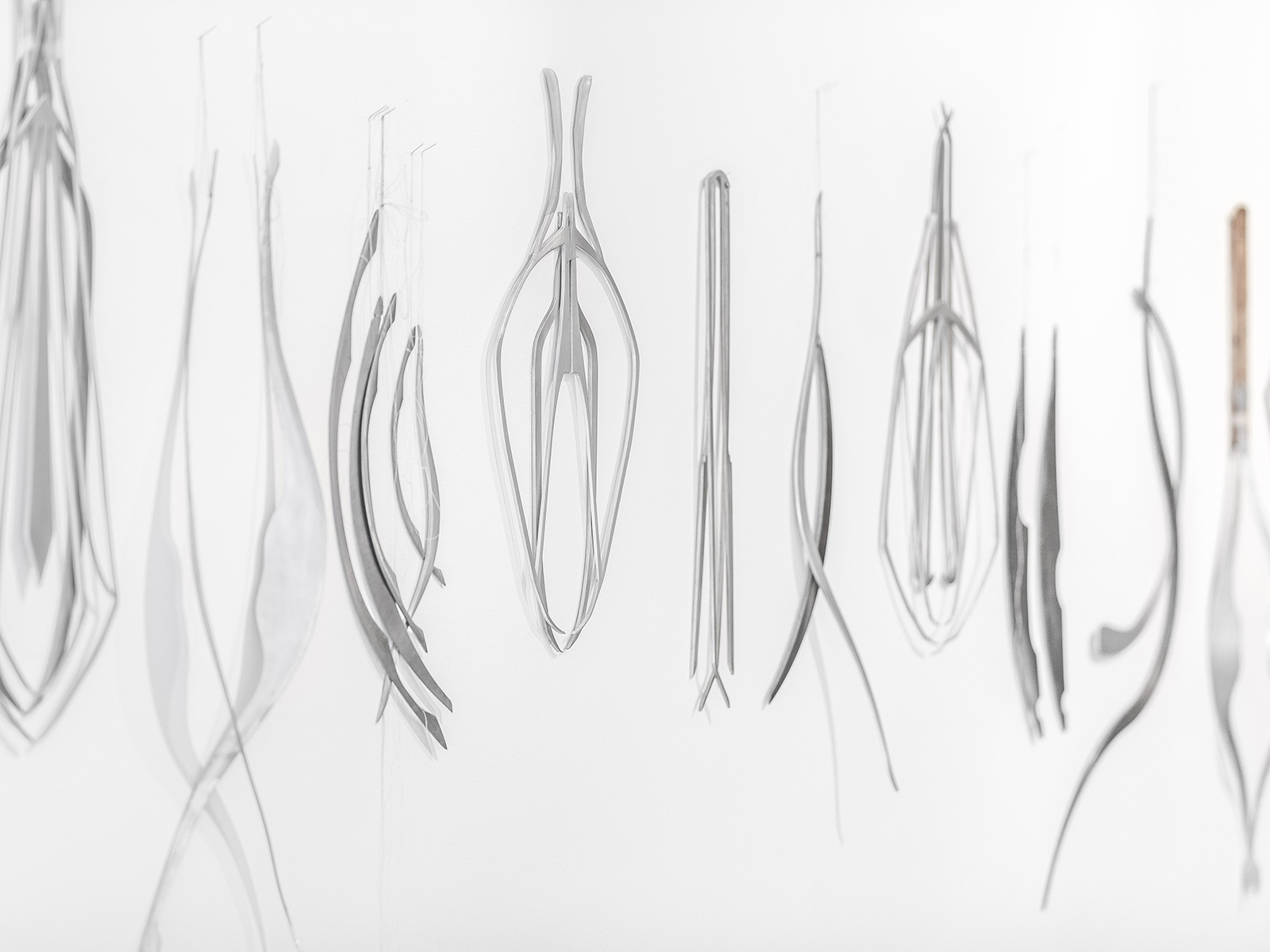 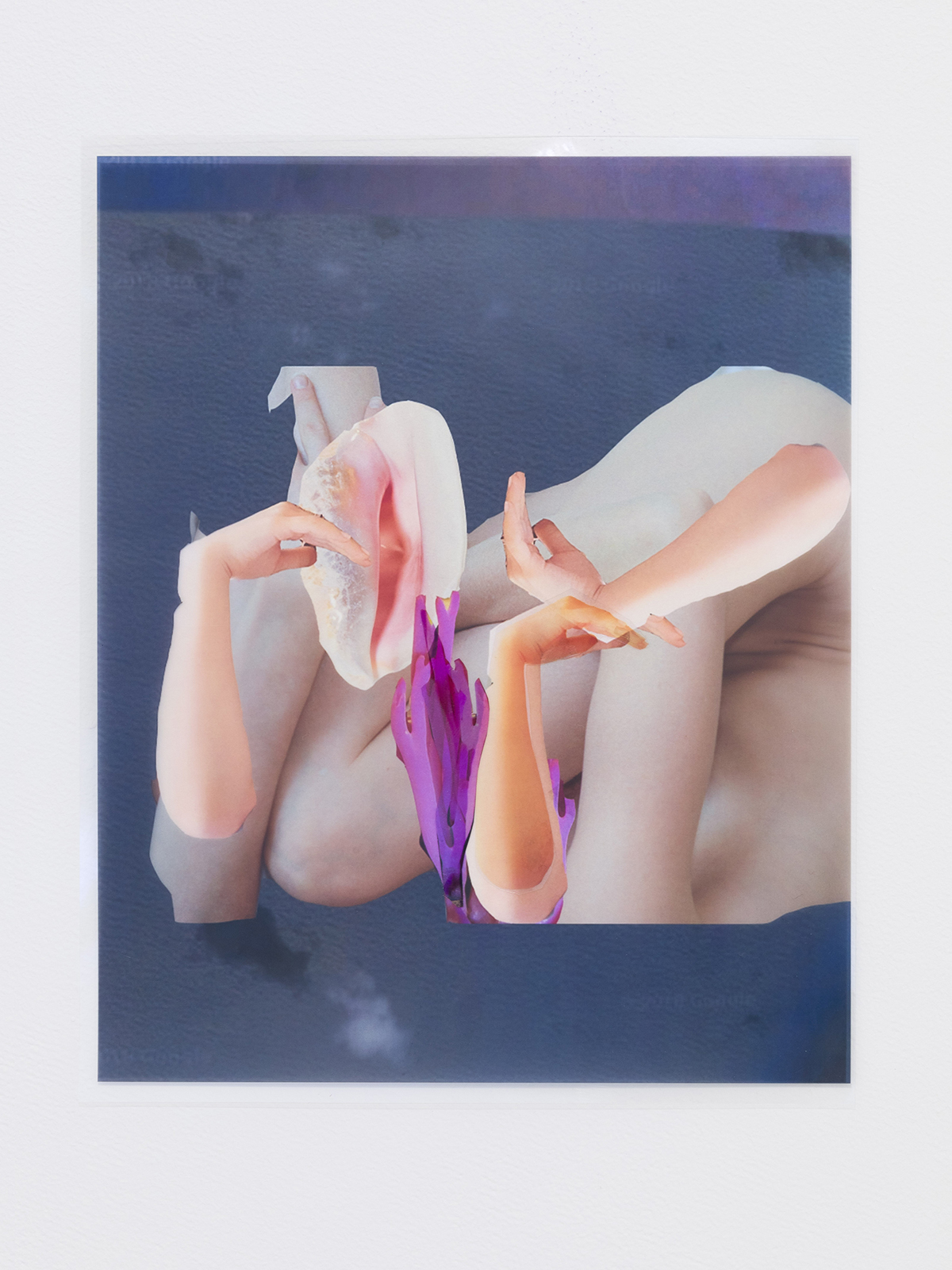 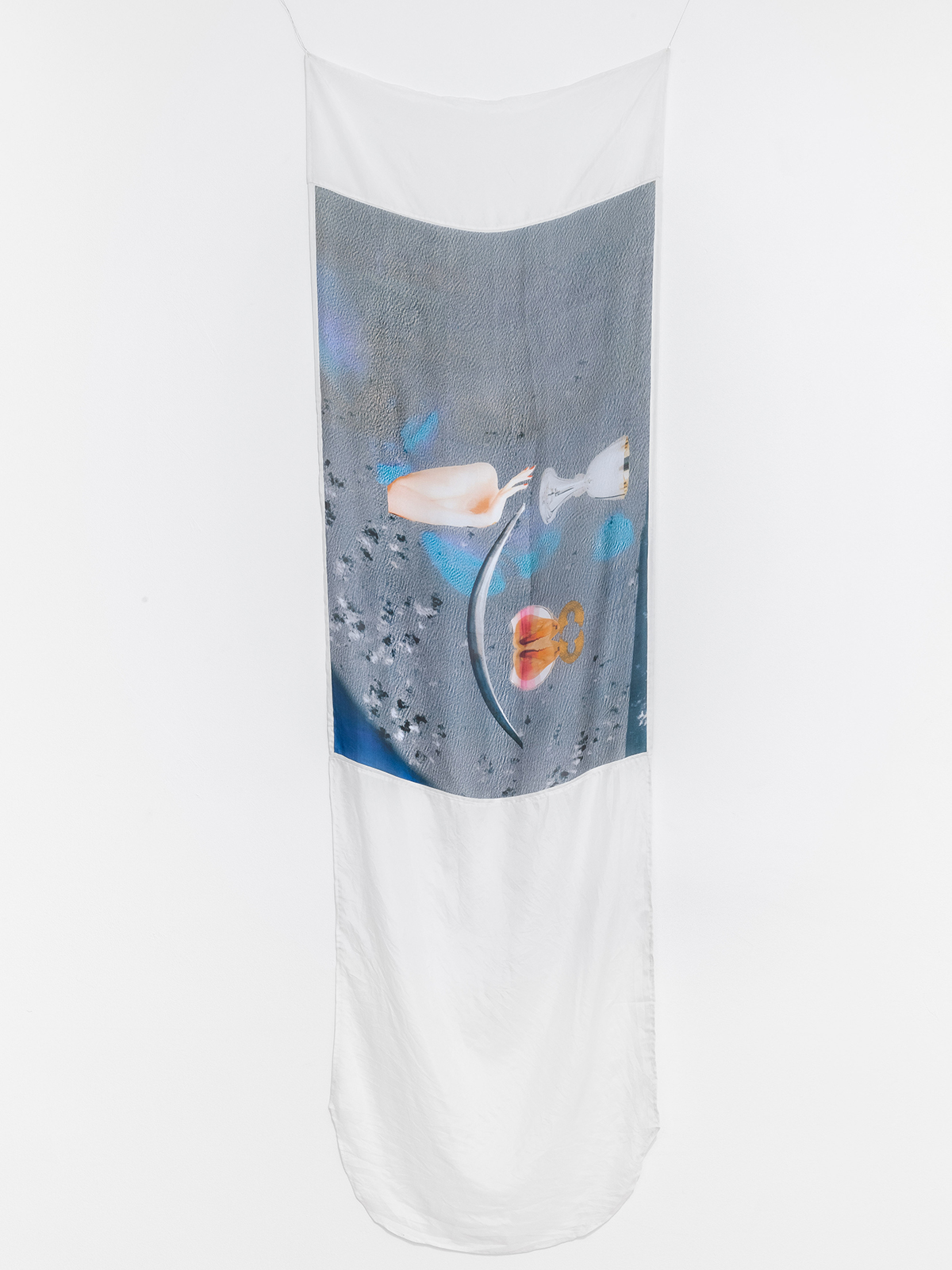 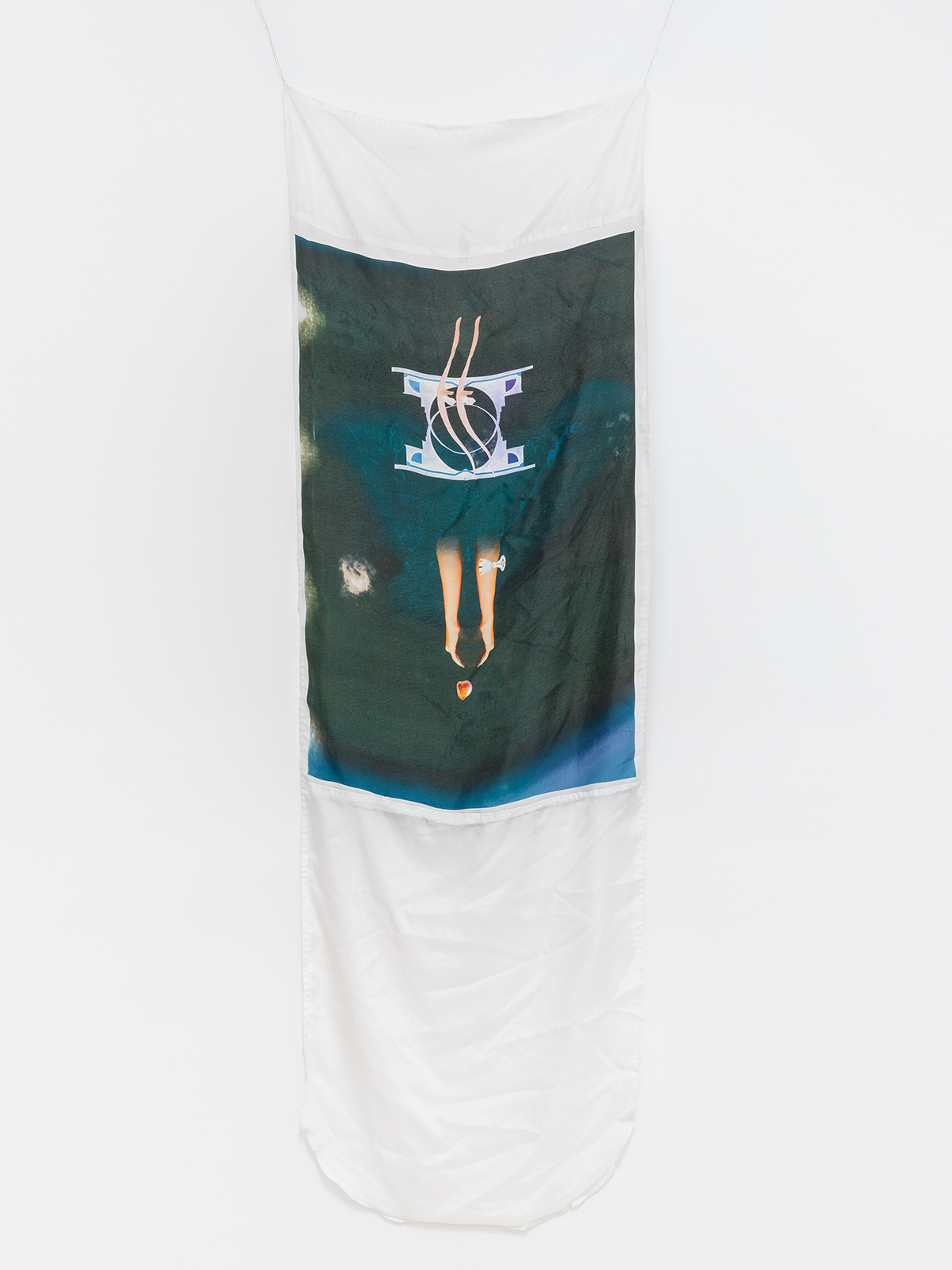 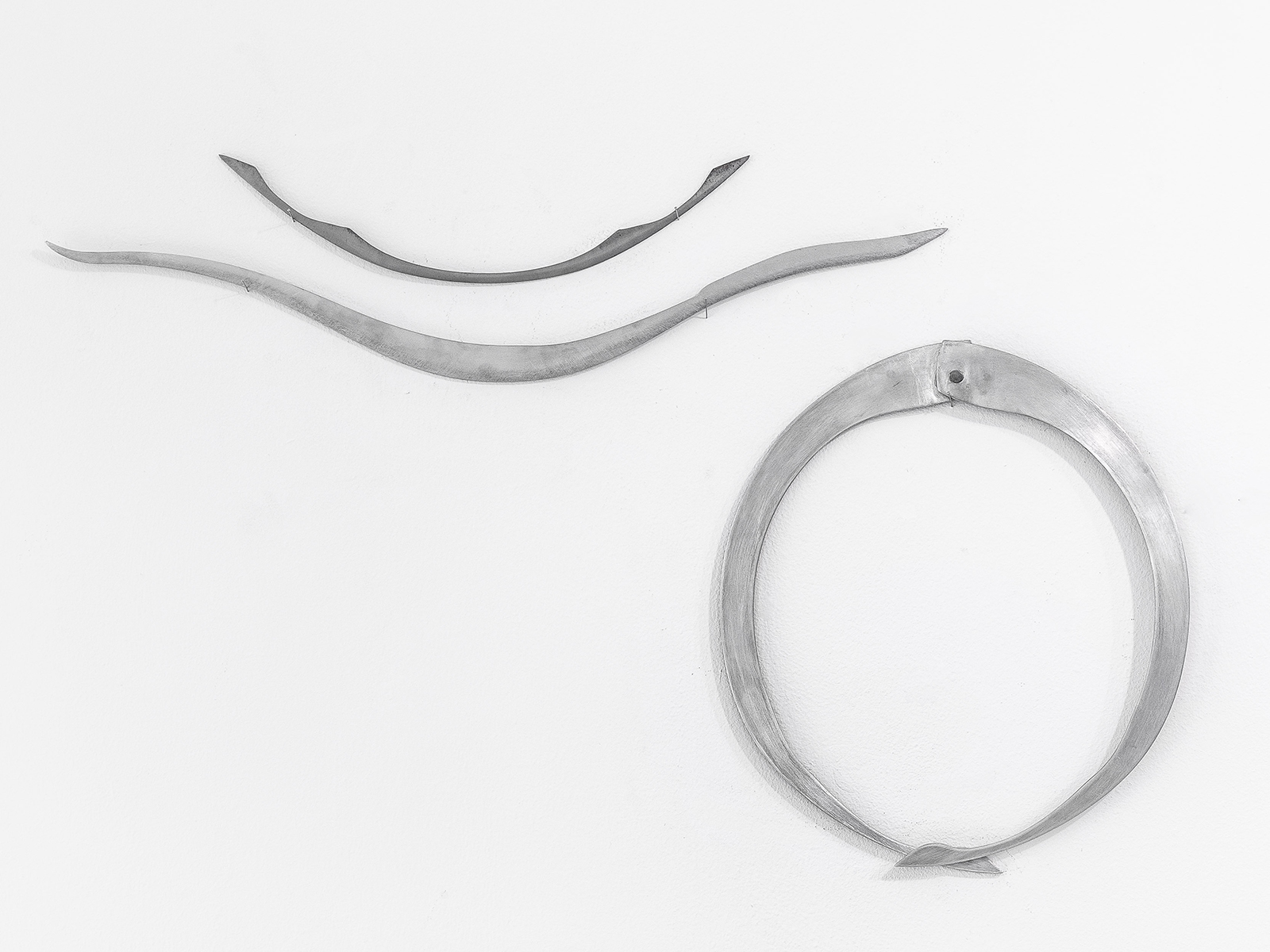 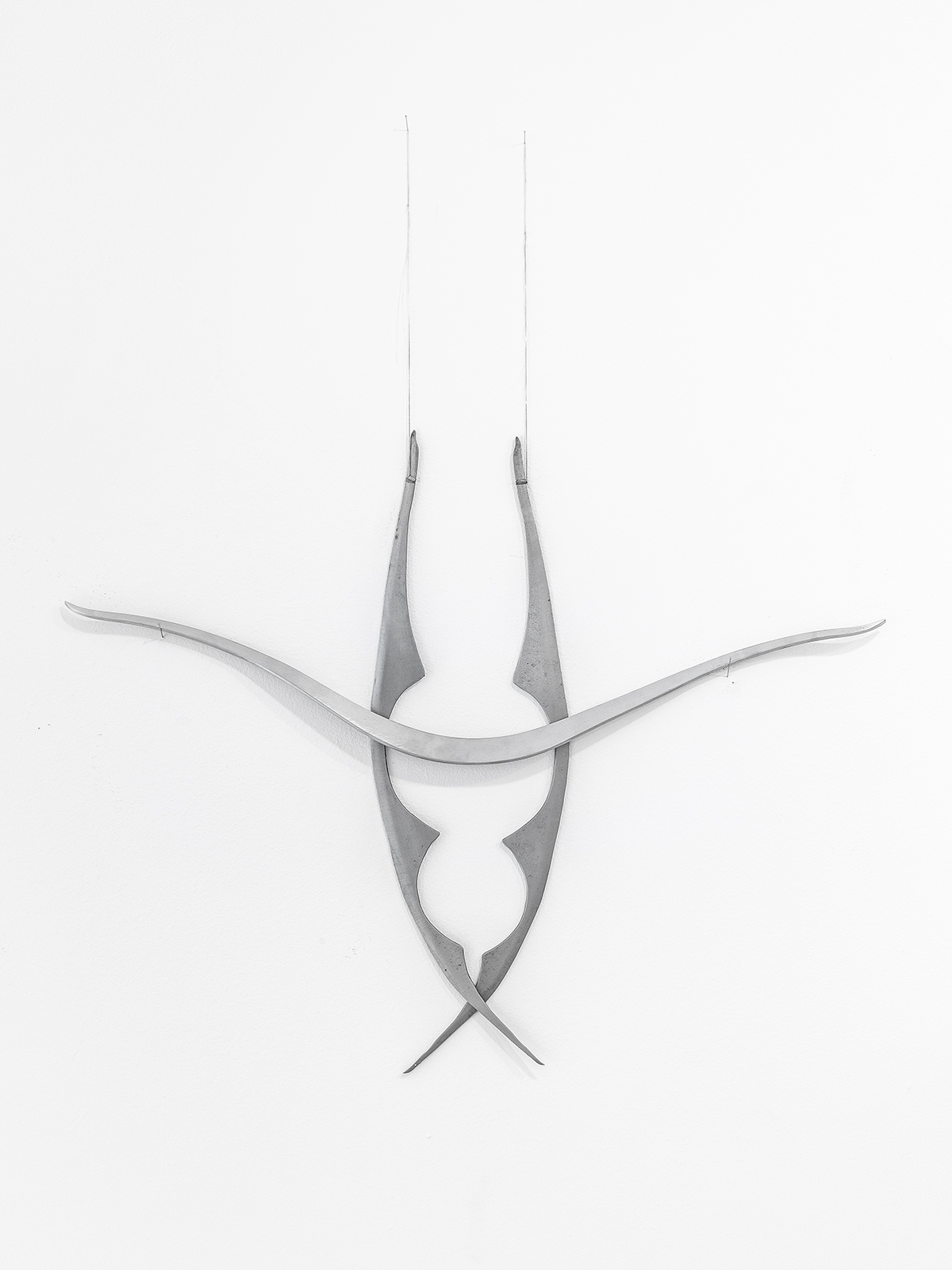 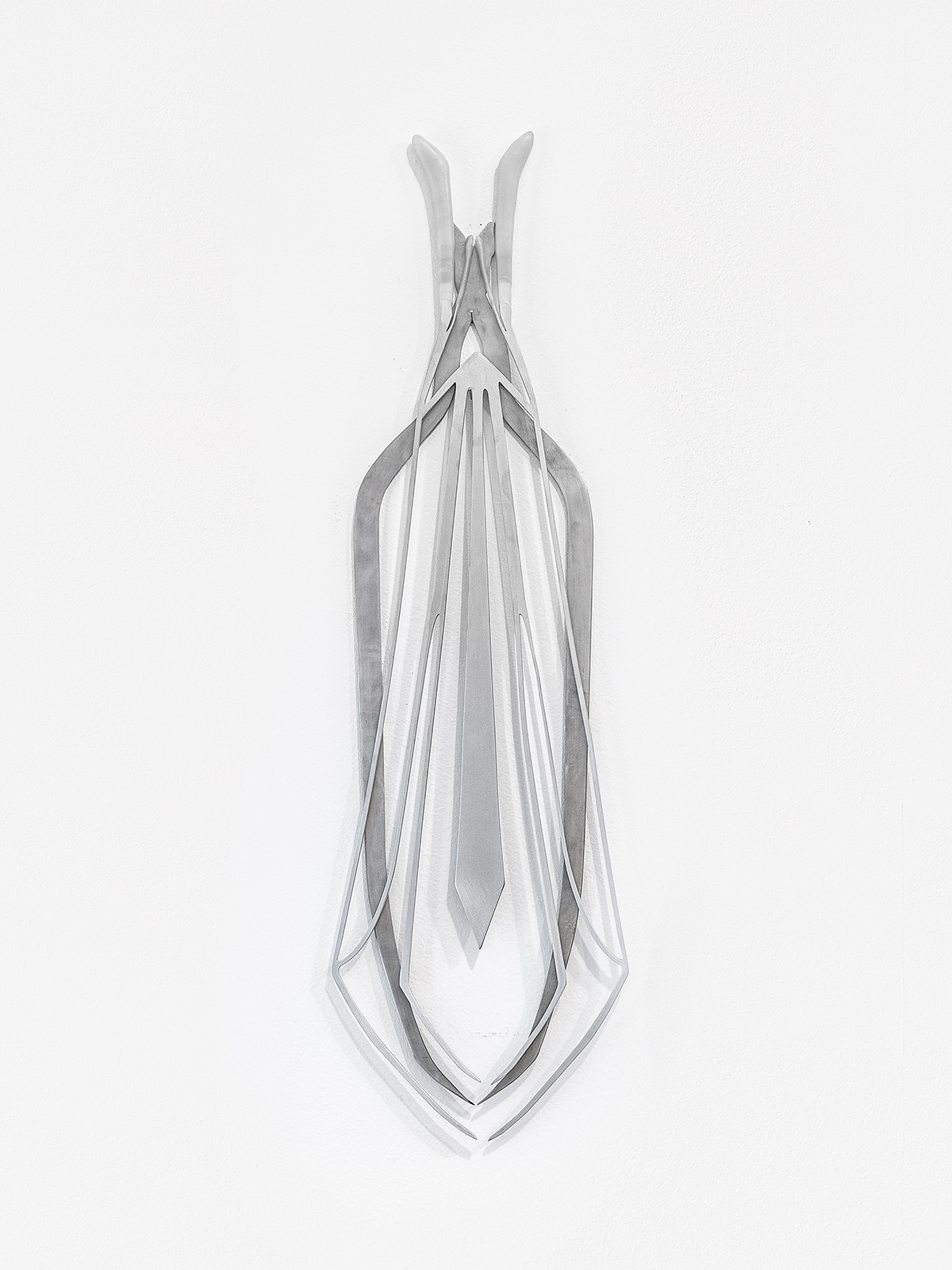 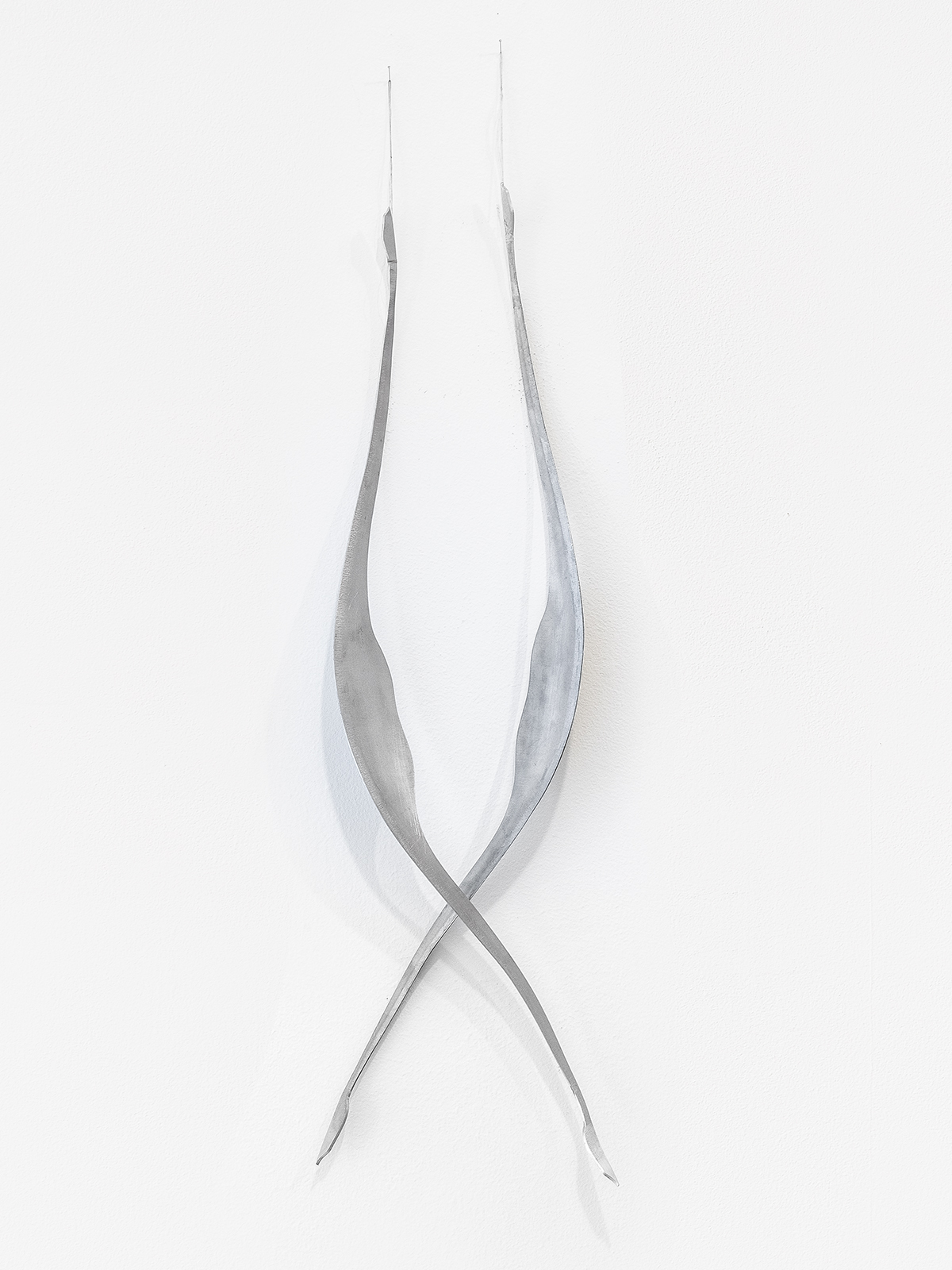 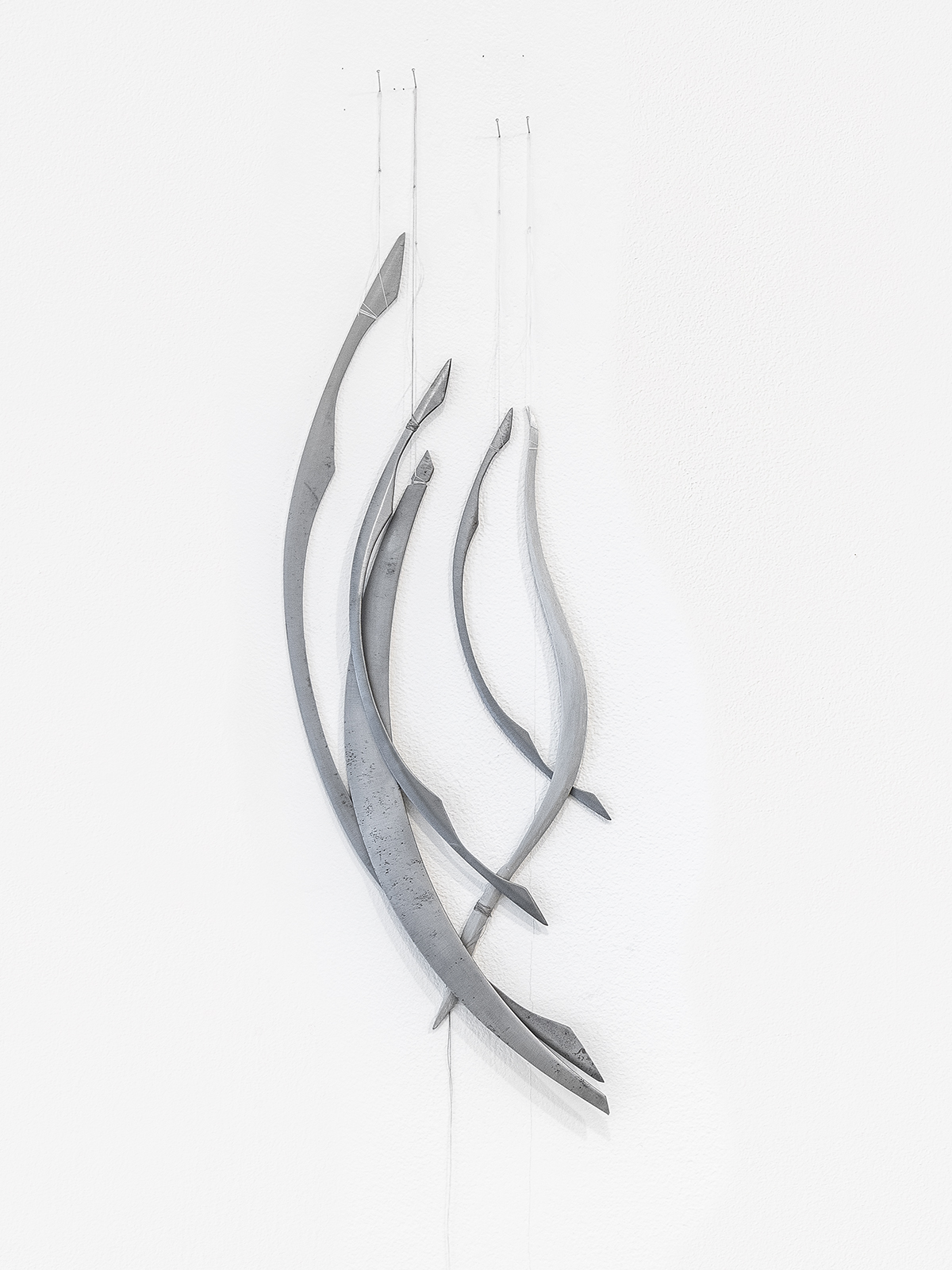 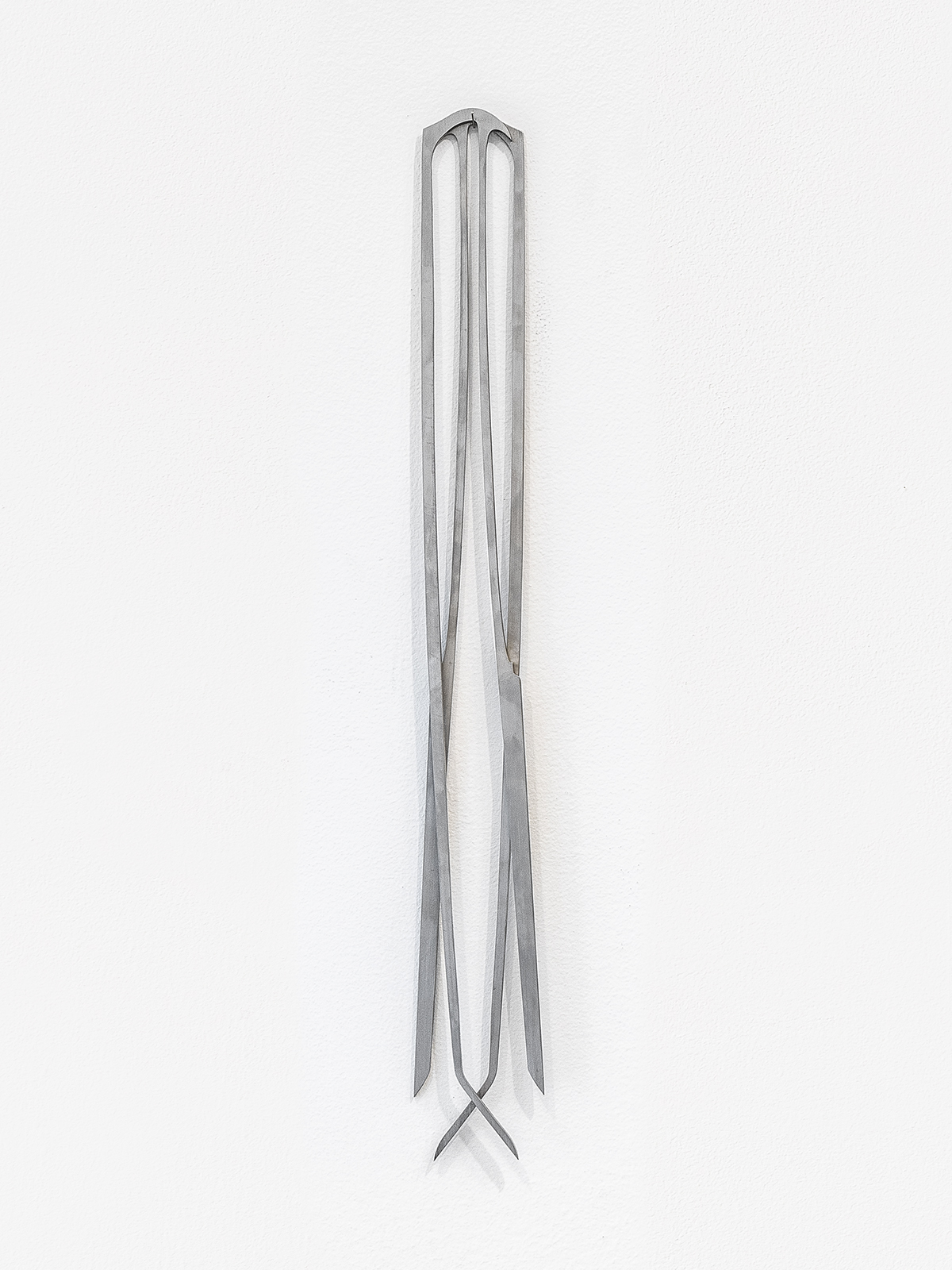 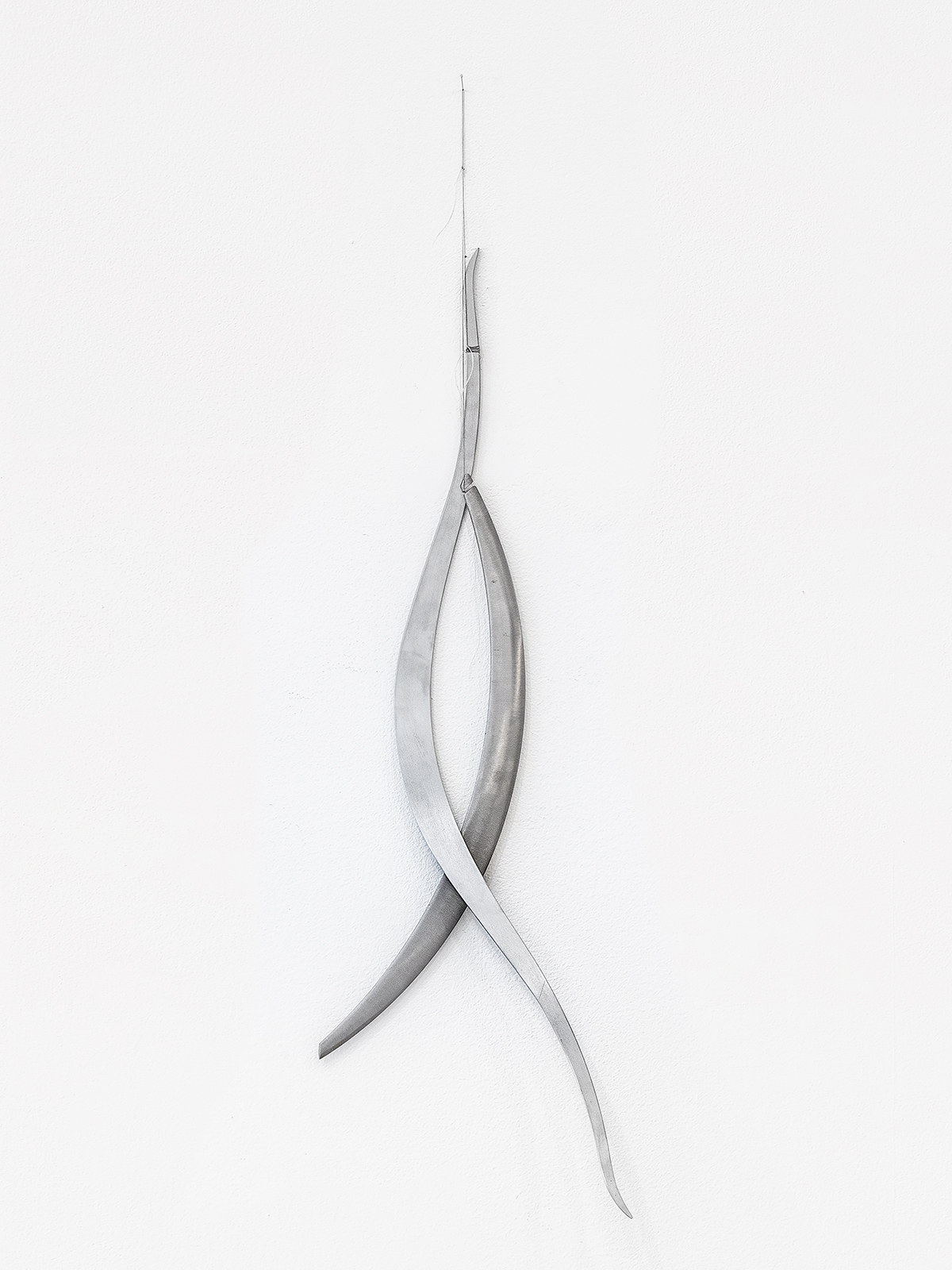 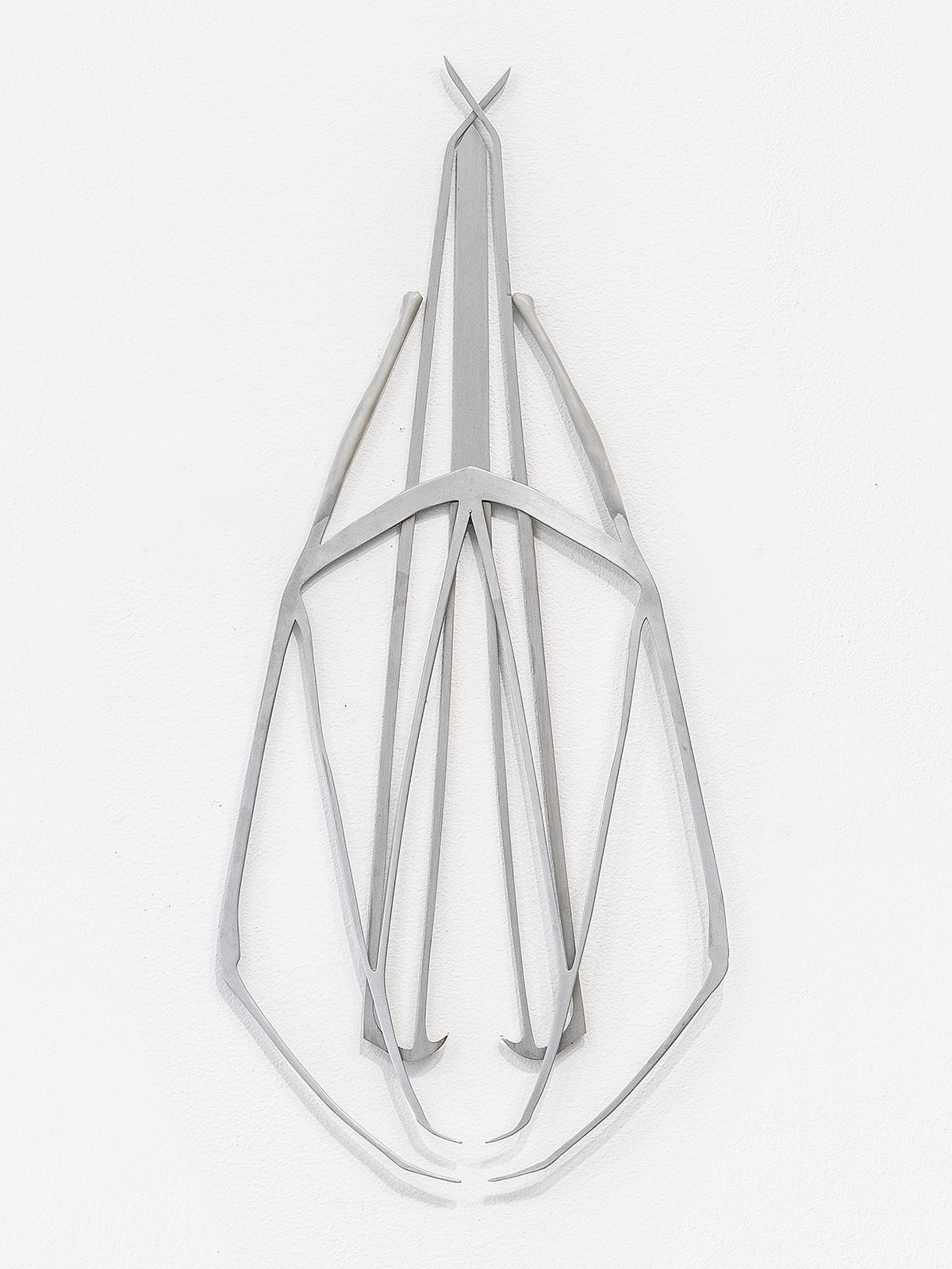 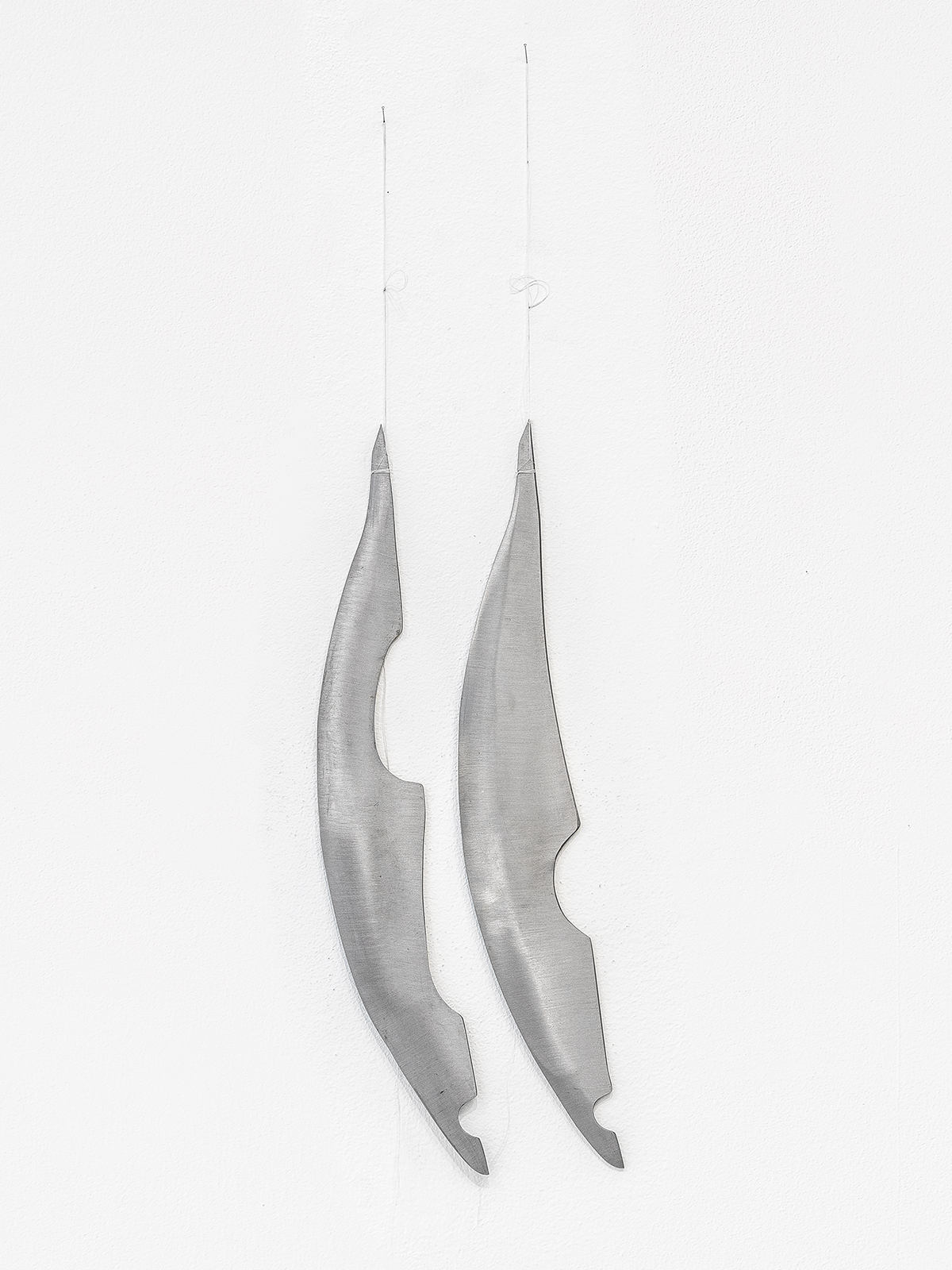 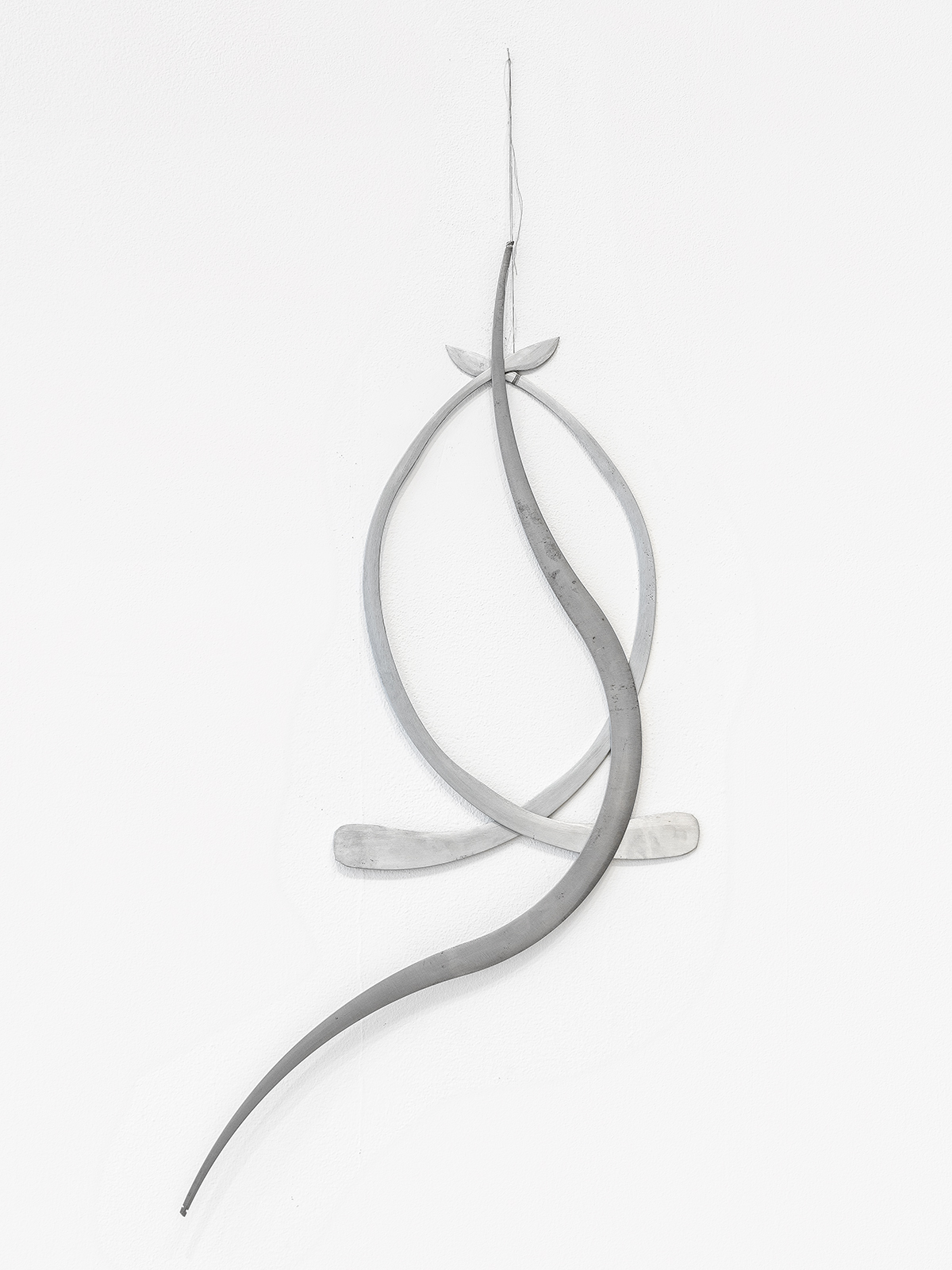 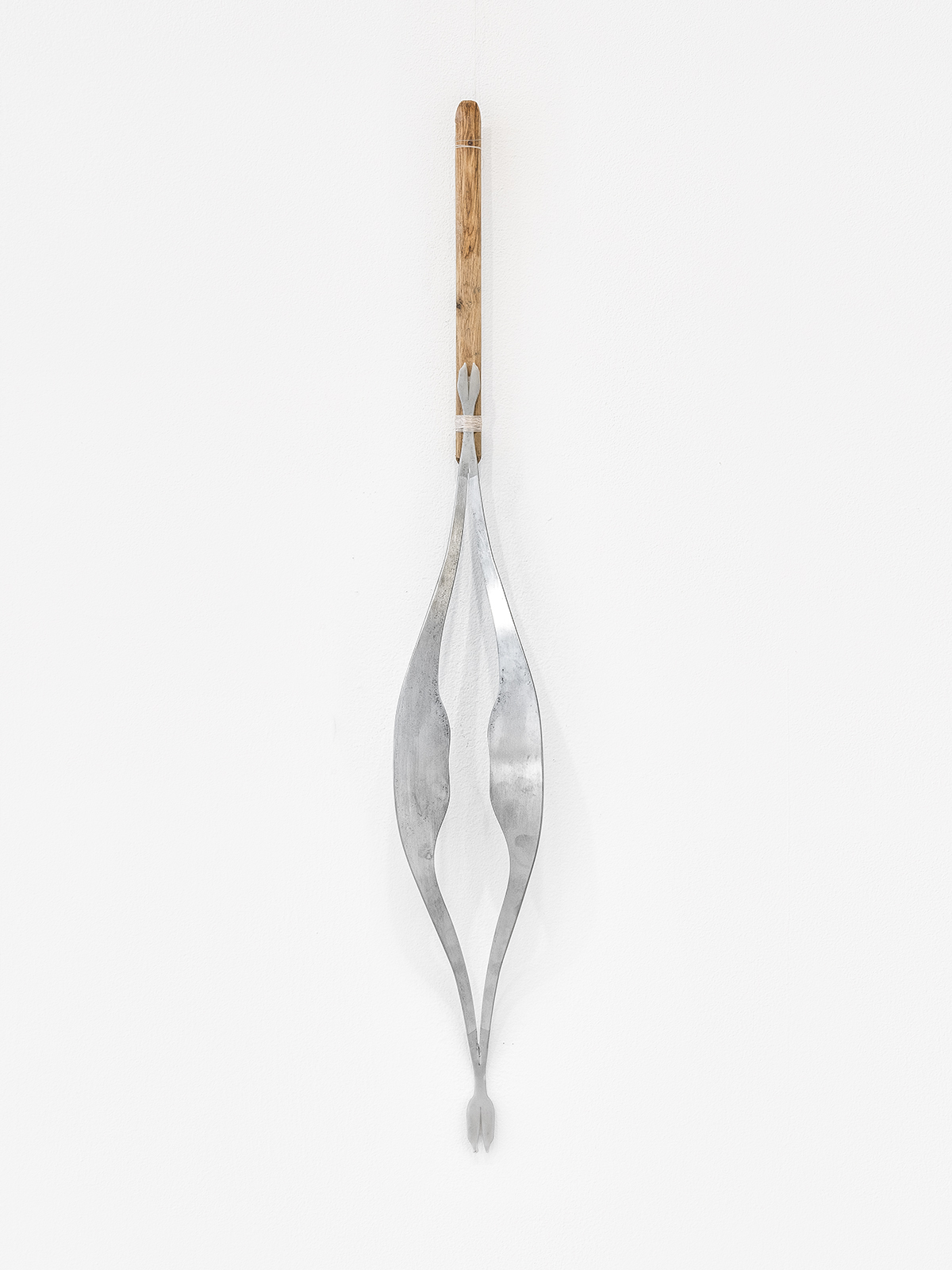 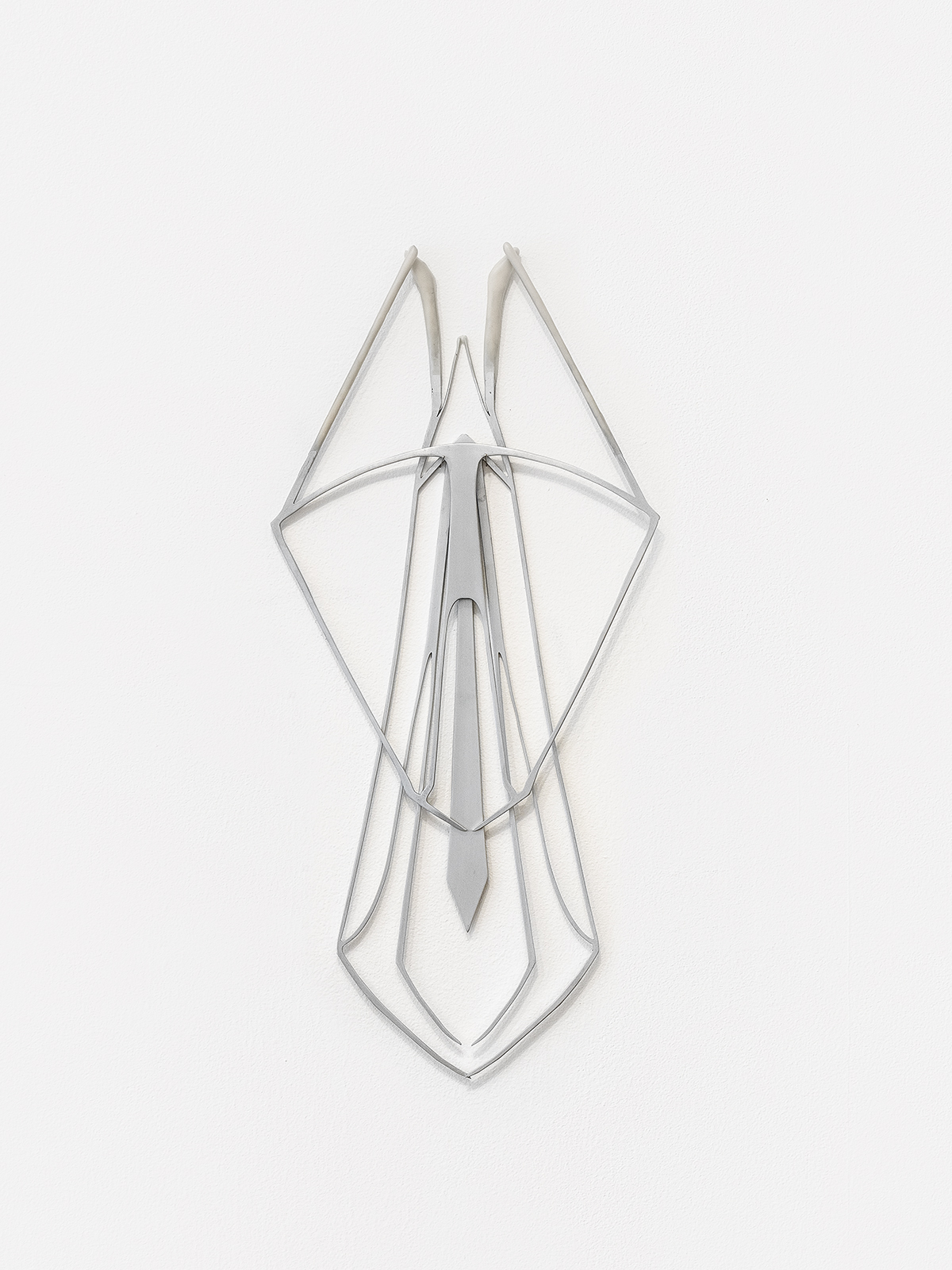 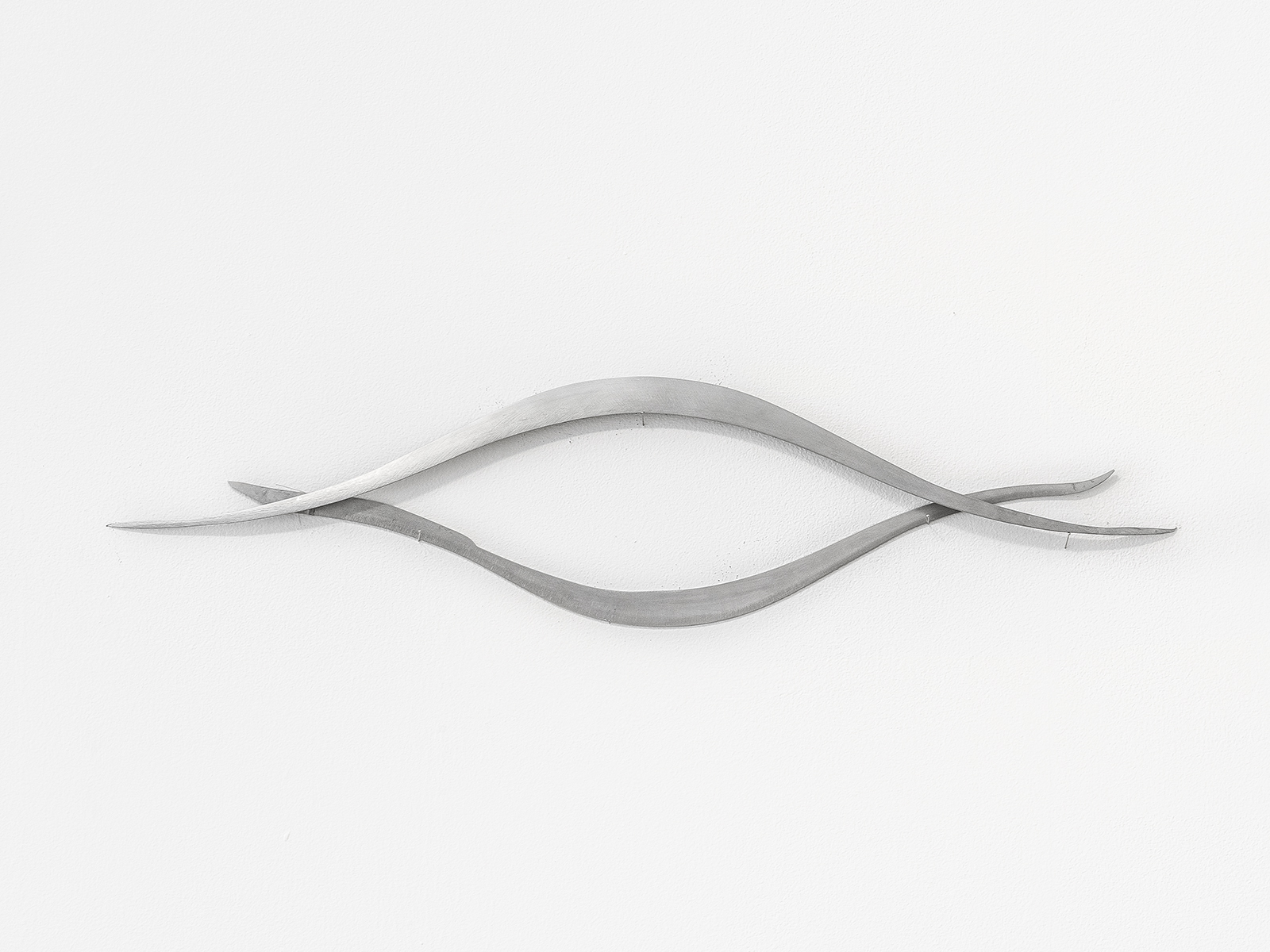 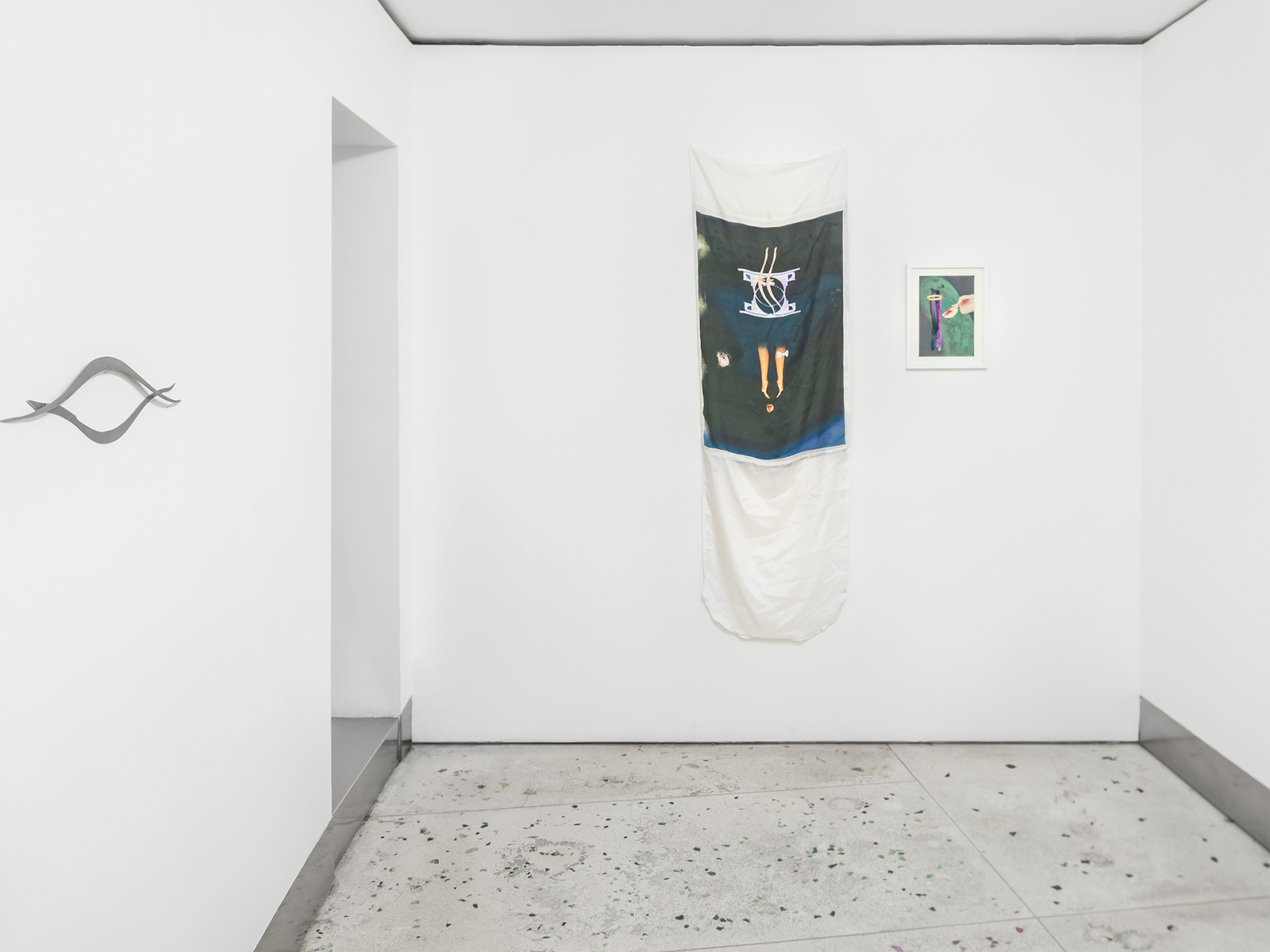