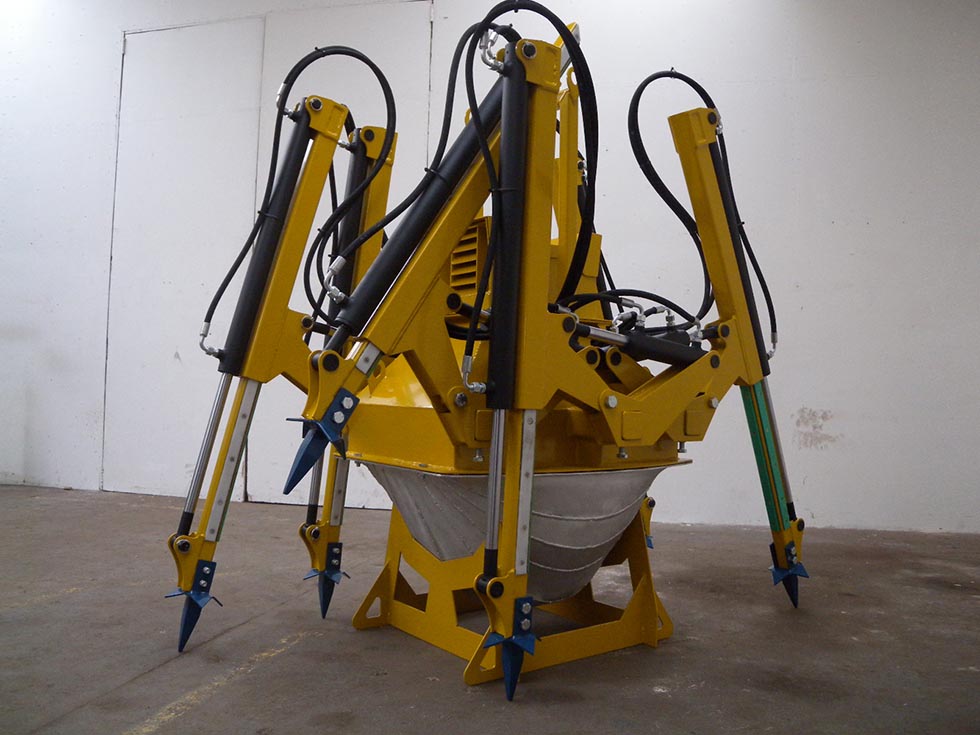 Rio dell’Orso is pleased to host a presentation of SIX STEP, a major new sculpture by British artist James Capper. On display for the first time, this sculpture was conceived for Venice – a city where water and ground cannot be separated. Given this setting, the sculpture’s amphibious nature needs little by way of context, indeed perhaps it is better to let our minds wander alone into the possibilities of a glossy, powder-coated, yellow sculpture that could hold its own on the streets and in the canals of the city. What does need context is the unique world of Capper’s tremendous sculptures.

Capper cuts and welds steel, fabricating all of his works himself, concerning himself with, in his own words, ‘problem-solving’. What defines his art is the way that such a sophisticated grasp of engineering can fuse so perfectly with his visionary creativity. Capper’s knowledgeâ€¨of machinery is the vehicle for his extraordinary understanding of what makes art great: form, detail, colour, and tension. The latter is arguably the backbone of his work – the sculptures he makes always have the potential to move, and are fitted out with power packs, motors, and hydraulic cylinders. SIX STEP, named after its six, spidery ‘legs’, has the functionality to ‘walk’ and ‘swim’. That is to say, SIX STEP can literally ‘walk’ out of the water on folding legs: a sculpture and simultaneously a performance, moving elegantly, powerfully, and with a hint of anthropomorphism. SIX STEP’s surreal amphibious form is rife with potential associations, ranging from military strategies to scientific investigations. These associations are only ideas that I had - it is important to note that Capper does not reveal any such ties. Instead, the artist leaves the minds of his audience to work on their own.

Capper’s sculptural concepts are divided into four Divisions: Offshore, Earth-Marking, Carving, and Material Handling. Each Division consists of ‘families’ of machines, which are supported by maquettes (that serve as prototypes), and drawings. A talented draftsman, he develops each sculpture by producing countless drawings, which have a confident line and delicate washes of color. While showing drawings alongside the sculptures can help inform the audience as to the depth and breadth of Capper’s imagination and interests, there are no drawings exhibited at Rio dell’Orso. This decision was made so that the scale and intensity of SIX STEP would remain intact. Capper’s work is high-impact and I wanted to recreate the feeling of walking into his South London studio and being immediately confronted with his sculpture-machines. No explanation: just a manifestation of latent brute force, offset by proportions and flawlessly balanced volumes.

SIX STEP is the first work Capper has made that straddles two Divisions: Offshore and Earth- Marking. The Offshore Division comprises works designed for water – such as boats and pontoons, examples include: Verity (exhibited at Hannah Barry’s Peckham Pavilion in Venice in 2009), and Sea Light (exhibited on the River Thames in London in 2010). Since 2011, Capper has been conceptualizing a full-scale Walking Ship. This is by far his most ambitious project, but one that I do not doubt will be realized.

The second Division that SIX STEP evolved from is the Earth-Marking Division, which includes machines that – as their name suggests – mark different terrains. This division has strong ties with the Land Art and Environmental Art movements of the 1970s, while presenting something wholly new, in the form of the distinctive presence and aesthetics of these large- scale machines. The value of the artwork lies simultaneously in the object – the machine – and the impermanent marks that it creates. Thus when SIX STEP will eventually be demonstrated on ground, the terrain will be transformed into a canvas, scored by a multitude of different gouged and spliced gestures.

Capper is a pioneering voice in contemporary sculpture, sharply obtaining inspiration from outside the traditional canon of art, while building on the legacies of David Smith, Julio González and Anthony Caro, in order to create unexpected beauty that is by turns raw and elegant. The, often inexplicable, beauty of Capper’s work allows it a rare duality of qualities: high-impact at first sight, yet with a deepening long-term impression, as all the while his sculpture rapidly evolves. 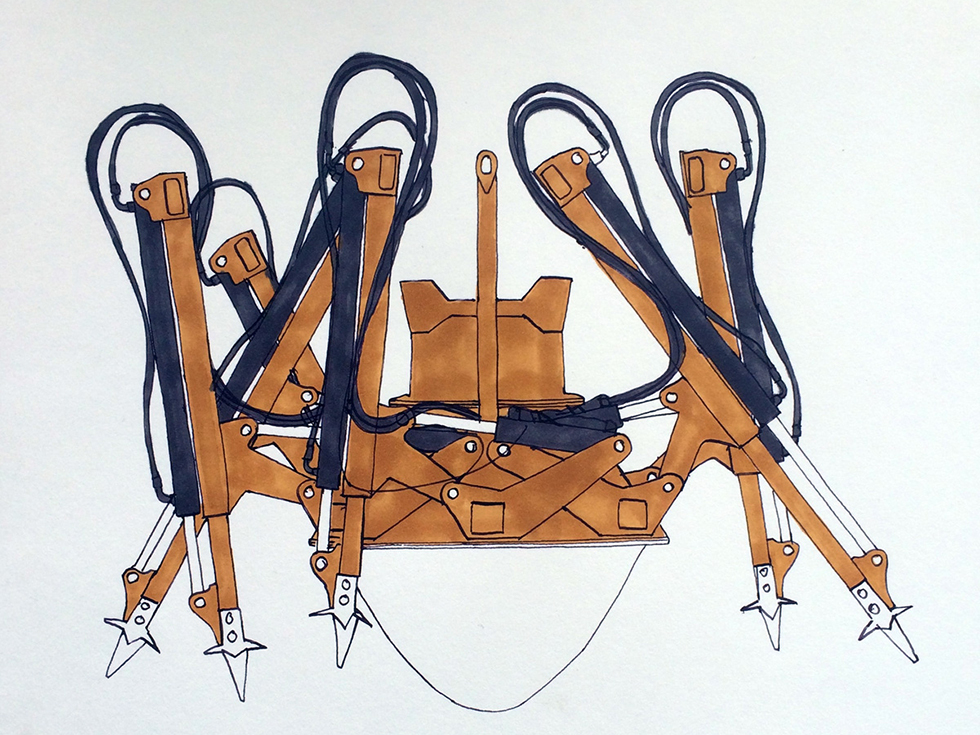 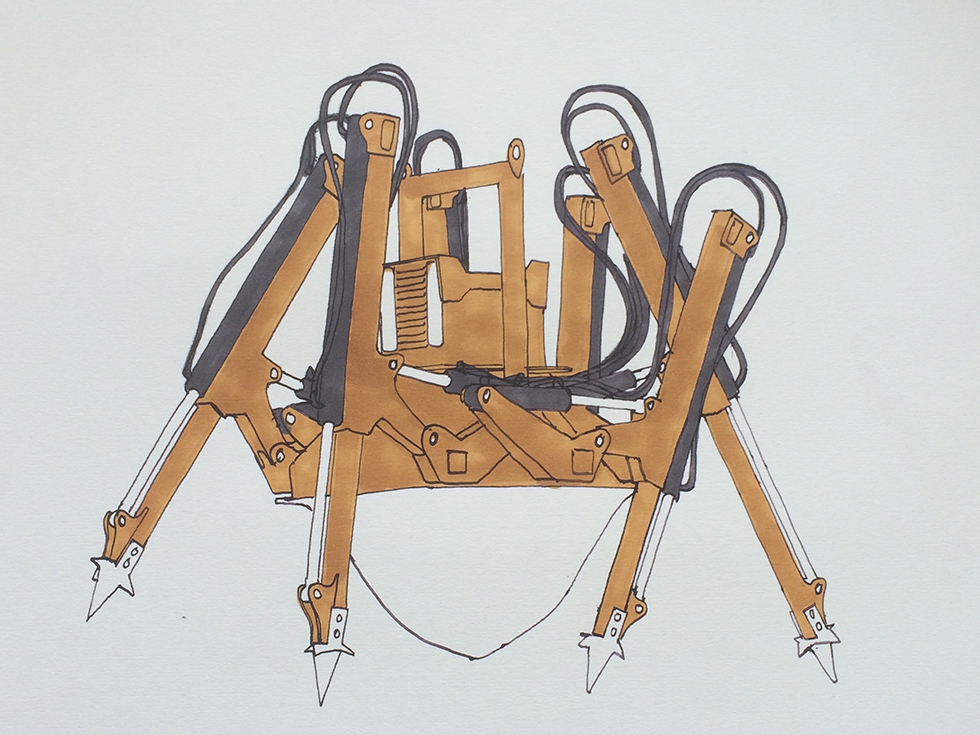