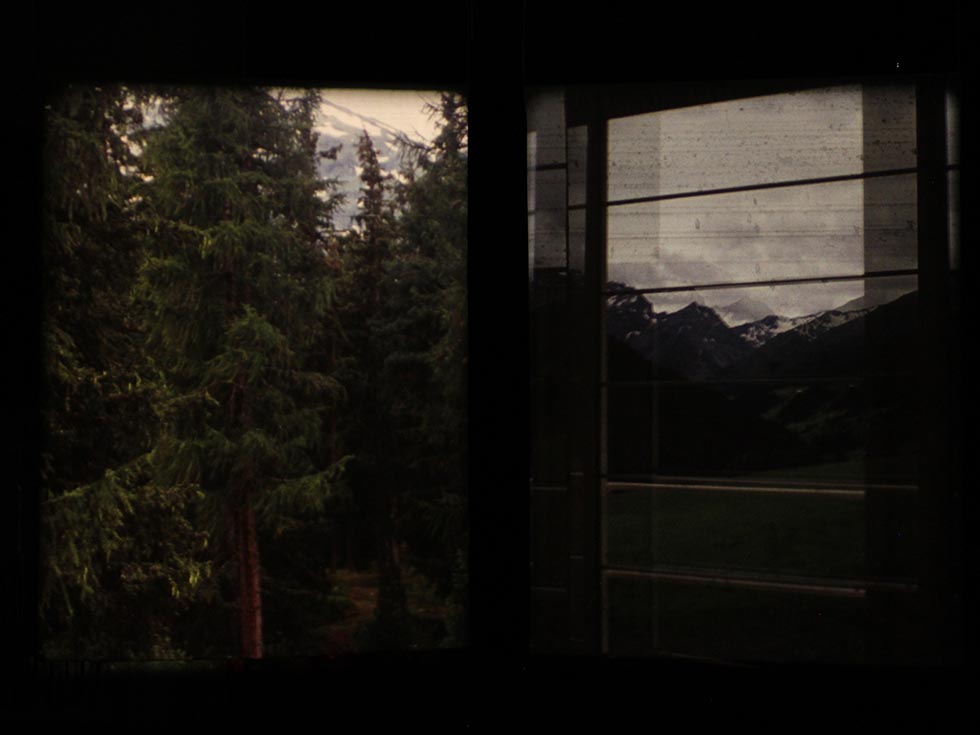 Emerging English artist Freddy Dewe Mathews presents artworks of great beauty while introducing surprising conceptual nuances. His work, which is manifested in a multitude of disciplines, can be appreciated and interpreted in a myriad of different ways. This is partly due to its deeply evocative nature that creates an intimate yet open-ended view into whichever world he choses to offer his audience. In Dewe Mathews’ exhibition, Ritschercha, he chose the world of the mountains of the Graubünden. Utterly contagious is Dewe Mathews’ fascination with unwritten histories, folklore, craft, and the healing powers of nature. The way that these are re-interpreted in his exhibition, Ritschercha, is complex and mature. Dewe Mathews thrives off travelling to far-flung places and responding to his time there, producing work in-situ. This he has most recently done in Bolivia through the Gasworks International Fellowship, where his work was centered on the Amazonian rubber trees. Another project that involved an even more remote location was Bouvetøya – an island in Antarctica that has been written about many times by 19th-century explorers, who had seldom actually been there. These elements of story-telling, daydreaming and myth-making recur in Ritschercha, where Dewe Mathews adds to the tradition of the ‘magic’ of the mountains, while simultaneously questioning how much this is a construct pioneered by European doctors and sanatoria at the turn of the century.


Ritschercha includes drawings, photographs and an ambitious video installation. This is the artist’s first foray into film, something that Lendi Projects encouraged as it supports young artists in the early and experimental stages of new directions in their work. While challenging himself technically, Dewe Mathews also made a daring move by choosing Thomas Mann’s Der Zauberberg as the starting point of his exhibition research. Dewe Mathews began to read the literary masterpiece before coming to the Engadin for the first time, and finished it while in Celerina. Der Zauberberg is set in nearby Davos - a place that Dewe Mathews visited several times during his residency. The artist focused on the idea of healing in relation to the mountains, and the heterotopia1 created by the sanatoria of the 19th century. The artificiality of sanatoria seemed to the artist at odds with the context of the natural world outside, and indeed, in Dewe Mathews’ video-piece, Interior Portrait: Nunc Stans, this contrast is evident. The construct of a place of healing, with a large dose of holistic guesswork and ritual (as described in Der Zauberberg), presents   a  cult   of   healing  but  also  of   illness  and  hypochondria.   In   theexhibition, we are faced with visions of a self-contained place: a bubble (the sanatorium) within a bubble (the isolated mountain area).

Dewe Mathews aligns being in a different world with the sensation of being ‘up here’ (as Mann writes). He explores the way in which time and light are very different in these mountains. The former can be perceived in his use of old-fashioned camera equipment, as well as the visual atmosphere of a quiet anachronism within Ritschercha. Notably, the light quality in the Engadin has been portrayed by Giovanni Segantini, Albert Steiner and Gerhard Richter (to name but a few). Dewe Mathews, having seen many different weather conditions during his extended stay in the Engadin, captures the crisp transparency of this distinctive light, treating it as a subject that is just as important as the trees or other physical elements. The sensitive combination of this display of light and time conveys the idea of a timeless present, something that Mann also addresses. This is a state that is re-assuring and soothing, as well as mildly threatening and claustrophobic. The resulting heady atmosphere charges our senses. We ask: how much do the mountains impact us physically as well as psychologically?

The internal and individualised narrative that Dewe Mathews built around his exhibition has its genesis in the notion of research. Indeed, Ritschercha means research in Romansch, the language spoken in the Engadin (and one of the four official languages of Switzerland). ‘Research’ is also the title of a central chapter in Der Zauberberg. Dewe Mathews has been questioning systems of research and the cross-overs between medical (a central theme in Der Zauberberg) and artistic research. This element of the exhibition was greatly enriched by conversations between the artist and PD Dr. med. Annette Moter, an expert in molecular diagnosis of TB and very familiar with Robert Koch and the history of TB. The type of research that appears to have the greatest overlap between the artistic and scientific field is that of experimentation. This encompasses trial-and-error, as well as an element of hocus-pocus. Trial-and-error was at the essence of the medical treatments in Der Zauberberg, and is arguably still relevant in medical research today. Dewe Mathews is interested in how medical research can be a very creative process that requires scientists to think out of the box. By contrast, Dewe Mathews’ research intentionally took a very rational, or one might say, scientific, approach.<

An aspect of the Engadin that Dewe Mathews included in his research is its unique   architecture.   Ritschercha  uses  a  traditional   Engadiner  house  as  a powerful framework within which to exhibit artworks. One enters from the bottom of the house – the entrance that was made for the livestock that lived under the house in winter and heated up the house. The visitor then walks up the stairs to enter the sulèr – the room that was always the largest in the house. This room’s unexpectedly large size had a function: it was originally the passageway for horse-carriages that led from the road, through the house, and into the barn. The carriages brought in hay that would dry in the barn attached to the back of the house. By responding to this structure, Dewe Mathews brings the house to life, treating it like a kind of body. When we enter the sulèr, it is dark, with blacked-out windows, allowing us to see the video projections. But this theatrical light effect also emphasizes the dramatic curved ceiling of the room and decorative features that adorn it, the rounded forms giving the feeling of being cocooned, or in the womb. The house’s role as a protective shelter – as was even more important in the past – comes to the fore.

There is a strong sense of narrative in the way that one passes through the house, delineating various parts of it. Dewe Mathews’ very particular narrative is an important feature throughout the exhibition, despite, or because of, its largely veiled nature. The narrative can loosely be described as a commentary on seeing, with the implications of eyes, lenses, windows and viewpoints that permeate Ritschercha and help shift the depictions from micro to macro. The ‘windows’ that Dewe Mathews provides - whether in the form of drawings, photographs or film - are sometimes topsy-turvy or bordering on abstraction, while the video-piece essentially shows moving photographs (akin to traditional Japanese cinematography). This makes us re-evaluate how we use our eyes and gives a sense of nature truly being studied.
The emphasis on the eye leads to it and the camera lens appearing as self-reflexive elements in Dewe Mathews’ video installation, Interior Portrait: Nunc Stans. This is particularly pertinent when one thinks about the two projectors as a pair of eyes. Indeed, Dewe Mathews’ research included the consideration of Descartes’ pineal gland or the third eye. The video installation is made up of two out-of-synch looping systems, and is related to the drawing of the pineal eye. In this cyclical film, the rhythm of breath, water and wind combine inharmoniously in a constantly varying synthesis - running ad infinitum. ‘Interior portrait’, the source of the title of the work, is the pet-name that Mann used for x-rays in Der Zauberberg. Taking these words out of their context transforms the meaning – to something poetic rather than sinister, or artistic rather than scientific. The idea of the portrait has a very literal significance for Dewe Mathews in Ritschercha, given that a main theme of his video concept was to present vertical-, rather than the customary landscape-, format for the projections. It also underlines the extreme verticality of the mountains and introduces the idea of a portrait of nature, alluding to the way that critics have often considered the mountains to be a character in their own right in Der Zauberberg. Furthermore, the unconventional, angled composition of the projections recalls a book, perhaps about the cult of the mountains – bringing us full circle. 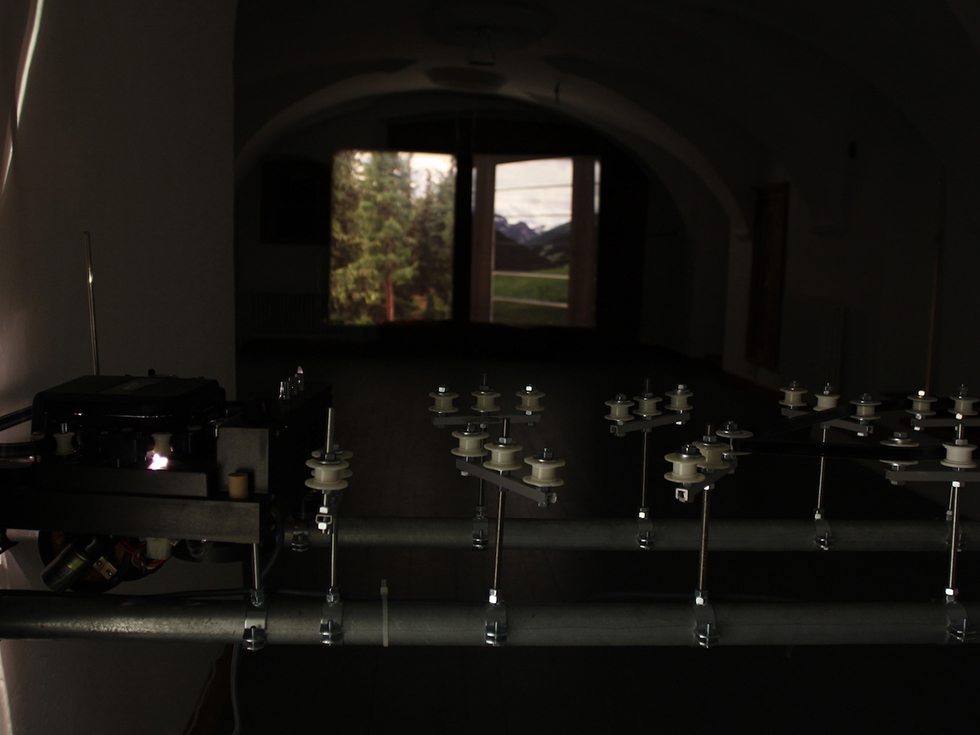 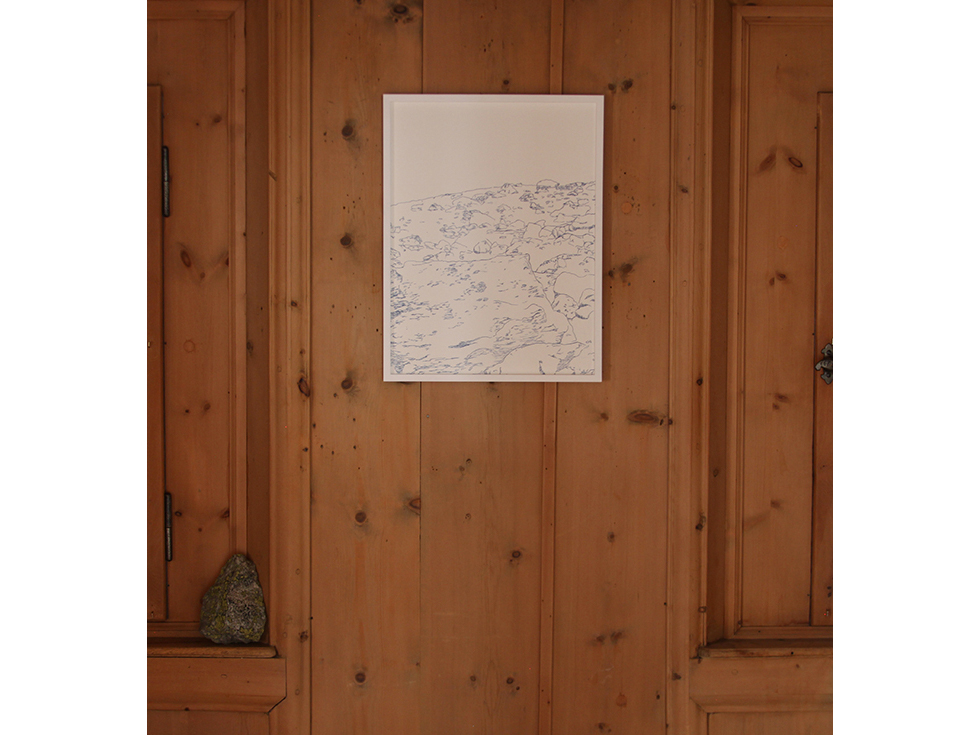 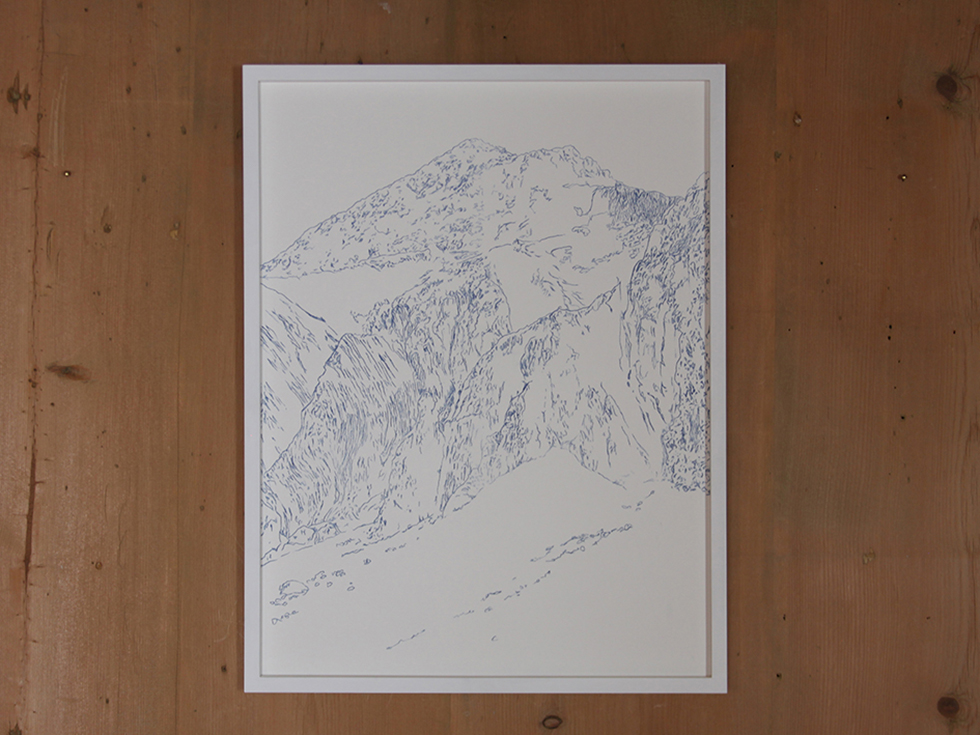 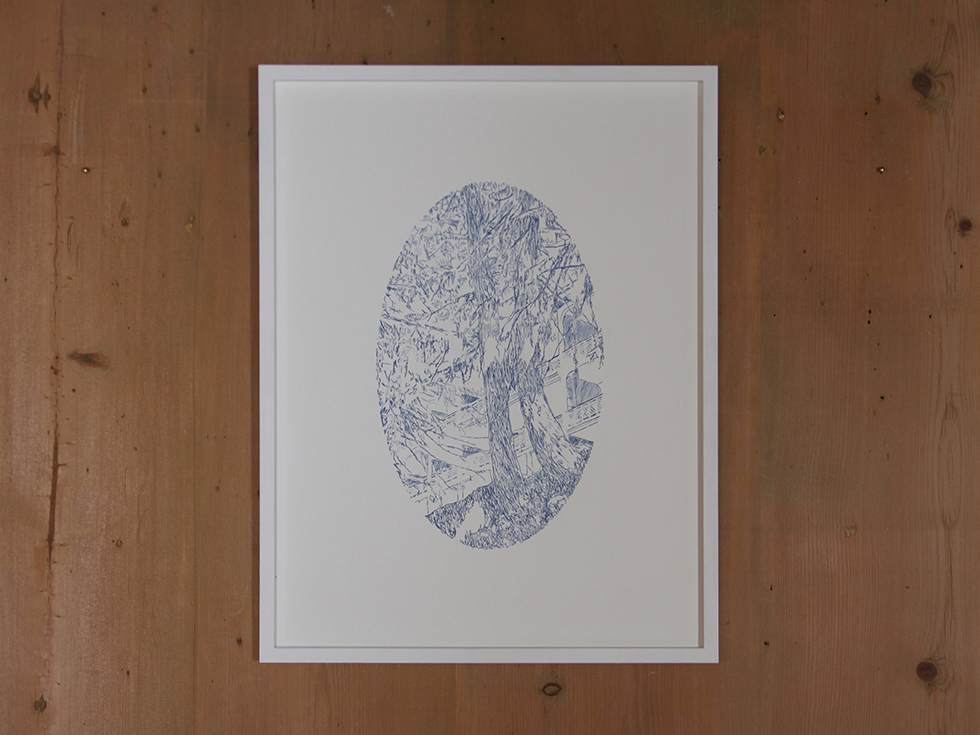 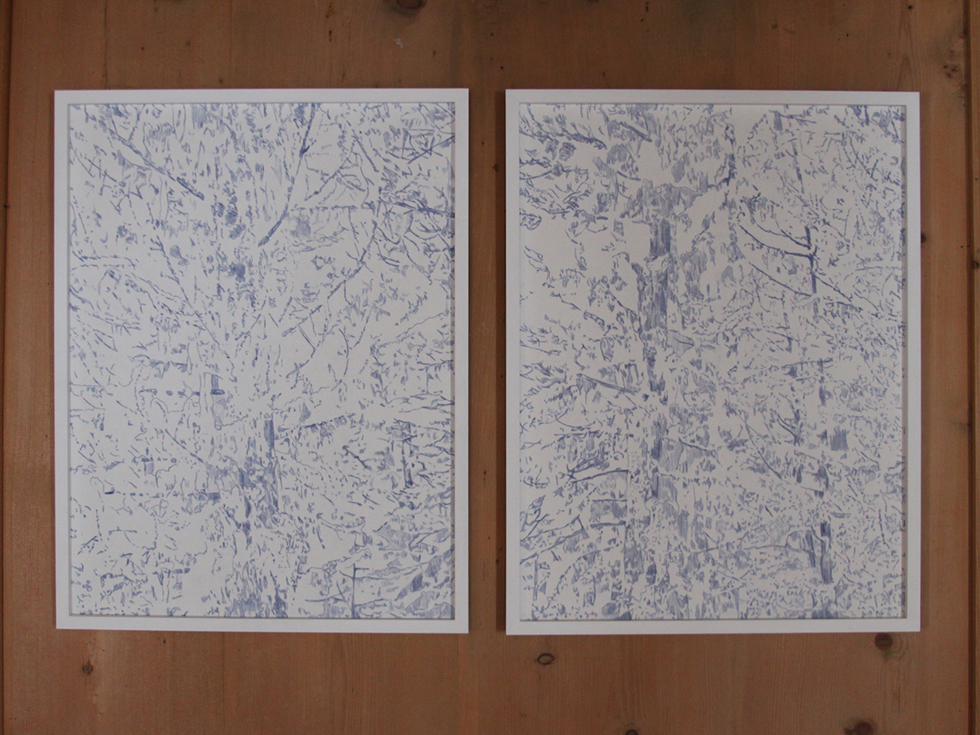 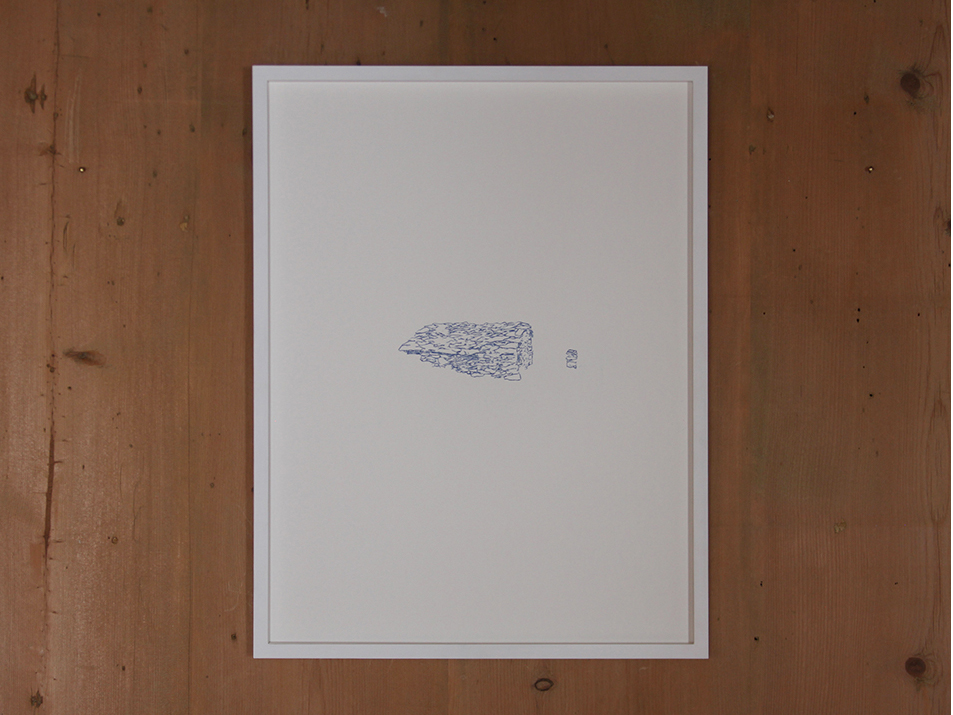 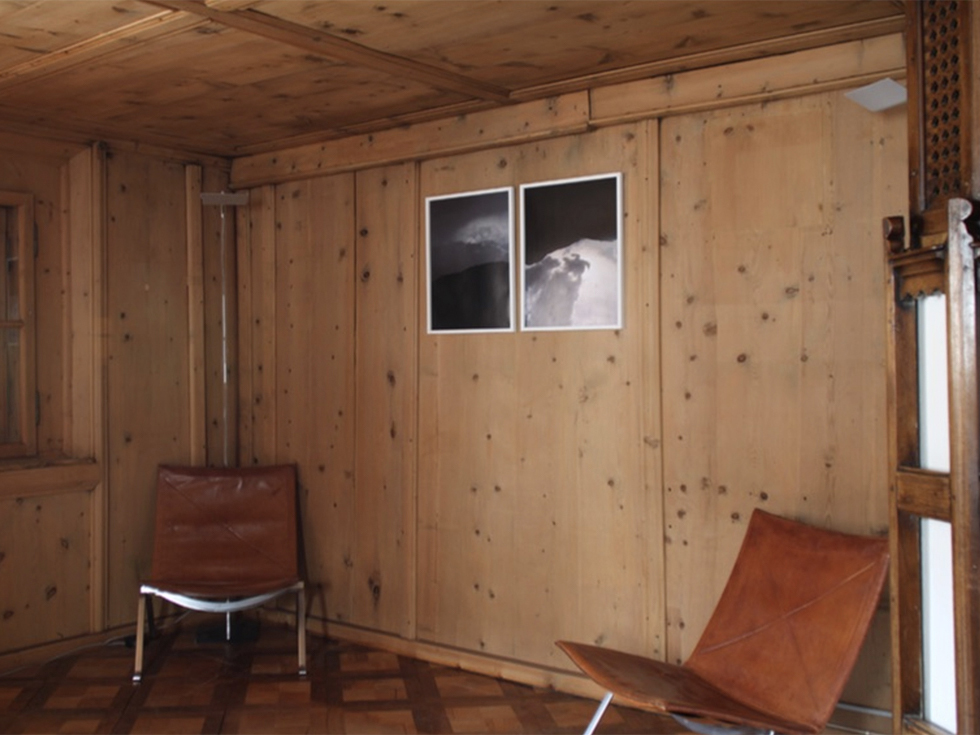 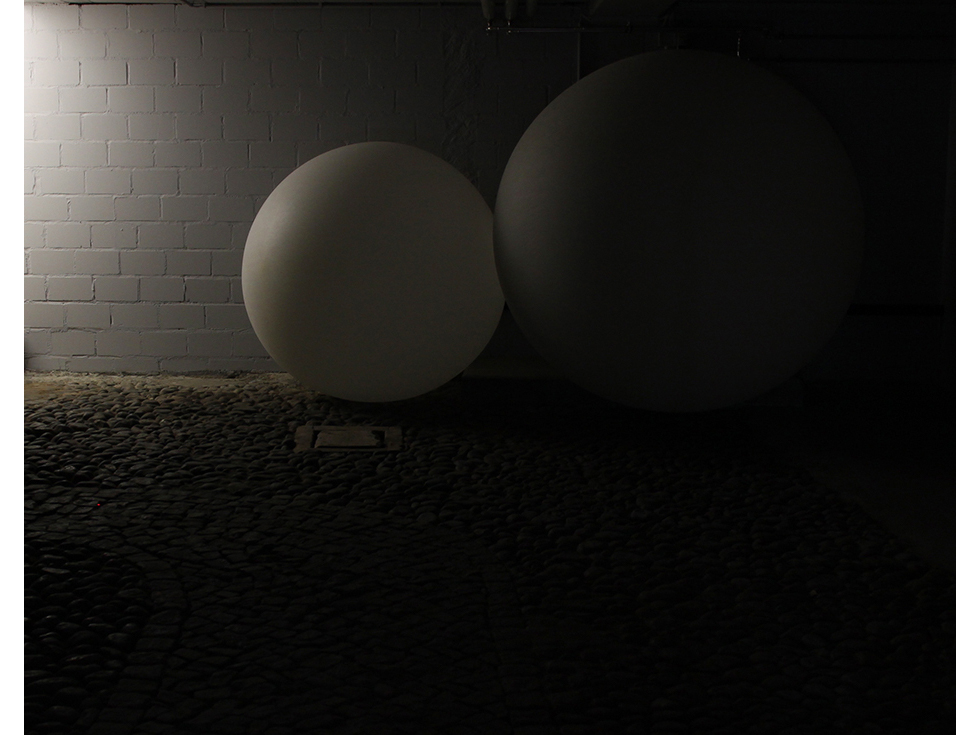